People seem to have dismissed the alliance between the Congress and the Telugu Desam Party (TDP) as the four-party People's Front was heading for a drubbing.

K Chandrasekhar Rao's gamble for early polls appears to have paid rich dividends as the Telangana Rashtra Samithi on Tuesday appeared to be advancing towards a three-fourth majority in the 119-member Assembly.

According to latest electoral trends, TRS is ahead on 92 constituencies while the Congress-led People's Front was leading in just 22 places.

People seem to have dismissed the alliance between the Congress and the Telugu Desam Party (TDP) as the four-party People's Front was heading for a drubbing.

Many top leaders of Congress were trailing in their constituencies while TDP, Telangana Jana Samithi (TJS) and Communist Party of India (CPI) were not leading in any of the constituencies they contested.

The victory will not only consolidate KCR's position in Telangana but also accelerate the momentum of his party to form an anti-BJP, anti-Congress alliance for the upcoming Lok Sabha elections.

HERE ARE THE HIGHLIGHTS OF TELANGANA ELECTION RESULTS

17:20 pm: Had there been a regional party in Madhya Pradesh or Rajasthan, it would definitely have done well: Asaduddin Owaisi

17:10 pm: AIMIM chief Asaddudin Owaisi extended his support to the victorious KCR in Telangana and said he has all capacities to form a non-Congress government. "This country requires a non-Congress and Non-BJP government. This nation requires leaders like KCR. I am with him," he said. AIMIM retained seven seats, and is trailing in one. "I would like to thank the people of Hyderabad for supporting our candidates. TRS' victory is historic and amazing," he added.

17:07 pm: Owaisi and I spoke about national politics, of how we can unite minority parties and communities in India. Make BJP-mukt Bharat and Congress-mukt Bharat: KCR in Hyderabad


17:02 pm: India needs to come out of the routine mudslinging, bickering and insulting that happens between BJP and Congress: KCR in Hyderabad

17:00 pm: Taking Hyderabad as a base, I will work in the national politics. We are going to unite the polity of India and the people of India. There are forces in the country that play dirty politics. It is not just about the alignment of parties. Today, minorities, majorities, dalits, OBCs, STs, everyone supported our party. Getting elected once is easy, retaining people’s trust is difficult. I see this as a positive thing: KCR addressing media in Hyderabad

14:19 pm: The Telugu Desam Party (TDP) said that  the Congress-led alliance, of which it is a part, needs to analyse and introspect on the grouping's "failure" in the Telangana Assembly elections.

"We have to analyse the factors that contributed to the success of TRS and failure of our alliance," said Ravula Chandrasekhar Reddy, senior leader of TDP, led by Andhra Pradesh Chief Minister N Chandrababu Naidu. "We were expecting to get more number of seats. The results are not to our expectations," Reddy told PTI.

The alliance which also comprised the Telangana Jana Samithi and the Communist Party of India, did not fare well, and "we have to analyse and introspect where it went wrong, and we have to work together", he said.

"We have to respect people's verdict", Reddy said, adding the alliance would now strive hard to see to it that the TRS government implements the "tall promises" made by the K Chandrasekhar Rao-led party. 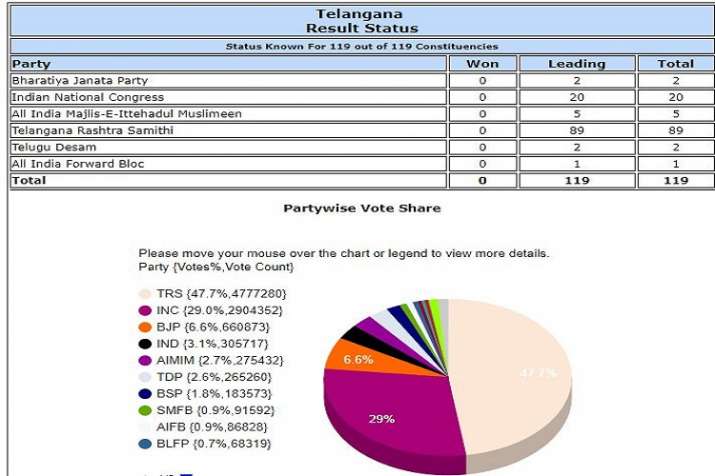 12:30 pm: Telangana Rashtra Samithi Legislature Party will hold a meeting in the evening today to elect KCR as its leader.

12: 27 pm: Commenting on the TRS sweep in Telangana assembly election, party leader AP Jithender Reddy told PTI, “This was expected because the people have accepted the (welfare) schemes (initiated by the government)...the infrastructure that has been built....24-hour power supply and timely pensions.” Jithender Reddy is the party’s floor leader in the Lok Sabha.

12:18 pm: Nothing is yet clear from the trends. Congratulations to the MLA candidates and the political parties that are winning. But Mahagathbandhan has failed terribly in Telangana, says Home Minister Rajnath Singh.

11:43 am: Telangana Pradesh Congress Committee's Uttam Kumar Reddy told ANI that he is doubtful about the results coming out of Telangana ballot paper counting. "We're doubting that tampering could have been done in EVMs. Slips should be counted in VVPATs. All the Congress leaders will complain to RO officers. We will also complain to ECI on this matter," he said.

11:29 am: TRS president K Chandrasekhar Rao is leading by 9,212 votes over his Congress rival Vanteru Pratap Reddy in Gajwel constituency after the fifth round of counting

10:14 am: KCR-led TRS cruises towards thumping victory, ahead on 91 seats

10:00 am: Akrabuddin Owaisi wins from Chandrayangutta.

09:55 am: KCR  all set to form government for the second consecutive term, TRS ahead on 88 seats.

08:00 am:  Counting of votes for Rajasthan, Madhya Pradesh, Chhattisgarh, Mizoram and Telangana begins. TRS leads by one seat.

07:20 am: Earlier on Monday, AIMIM president Asaduddin Owaisi endorsed Telangana caretaker Chief Minister K Chandrashekhar Rao as the next chief minister of the state and has expressed confidence that he will form the government without anyone else's support, reported ANI.

"I want all my eight candidates to win and we want KCR to become the chief minister of Telangana," Owaisi said.

06:55 am: The IndiaTV-CNX Poll has predicted a resounding victory for TRS and KCR this time.

The Telangana Results will determine the fate of TRS. It's definitely a do-or-die battle for KCR and TRS. If KCR wins a second term, not only will he consolidate his position in Telangana but also accelerate the momentum of his party to form an anti-BJP, anti-Congress alliance for the general elections.

If the Prajakutami or Congress-TDP-TJS-CPI grand alliance wins the polls, it would boost the party's morale ahead of the 2019 Lok Sabha Polls. But if it loses the election, it will cripple efforts for a 'Mahagathbandhan'. This will not only be a blow for the Congress but will also leave regional parties scattered in their efforts to counter the BJP wave across India.

KEY BATTLES TO WATCH OUT FOR

Currently, the seat is being held by KCR, who is aiming not only to consolidate his position in Telangana but also hoping to spread his wings in New Delhi. Holding on to the seat, however, seems difficult. His competitor Vanteu Pratap Reddy from the Congress, who lost to KCR in 2014, has ensured that, in the last four years, he makes his mark in the constituency.

A TRS bastion, currently held by KT Rama Rao. The seat holds importance due to the rumours of Rao being made CM if TRS comes to power. So to give a tough fight, the Congress has placed one of the most popular Telangana leaders, KK Mahender Reddy for the same seat.

The seat is held by the man who could possibly be the next chief minister in the state if Congress comes to power, Komatireddy Venkat. A very vocal critic of KCR, the latter has pitched his strong man Bhupal Reddy against him. Reddy was also ousted by the TRS from the Assembly, but a High Court order overturned the suspension.

The AIMIM’s bastion is represented by Akbaruddin Owaisi. It would be tough battle as BJP has fielded its Muslim candidate, Shehzadi, a young ABVP leader from Osmania University.

Yet again a TRS bastion held by Harish Rao, he has been elected five times from this seat. It’s his stronghold that is being challenged by TJS’s candidate Bhavani Reddy, a candidate fielded by the grand alliance.

Represented by BJP’s Raja Singh Lodh, one of the most controversial leaders in Telangana at the moment, the seat has been the epicentre for politics over beef and cow. The constituency is notable a Muslim dominated constituency.

The Congress’ stronghold represented by working president Revanth Reddy. The competition turns interesting as Reddy was once with the TRS during the fight for a separate state, who is now fighting TRS’s strong candidate and interim minister’s brother Patnam Narender Reddy. Revanth Reddy was also arrested by the Telangana police recently for threatening to disrupt KCR’s public meetings.

A seat being fought between one of the Congress’ strongest leader Uttam Kumar Reddy and TRS’s Saidi Reddy, a non-resident Indian.