The Maha Kootami (Maha Gathbandhan) of Congress, TDP, Relangana Jana Samiti and CPI, may win only 37 seats. Out of this, Congress may win 32 to 38 seats and TDP may win one to three seats.

The ruling TRS may get a clear majority by winning 66 seats within a range of 62 to 70 seats, according to these exit polls. 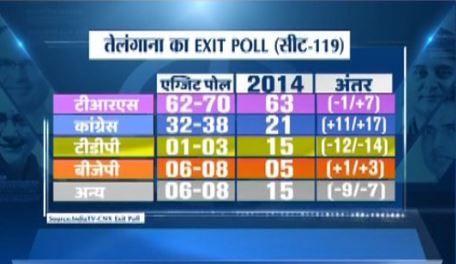 The exit poll was conducted today at 400 polling states covering 40 assembly seats, and questionnaire was given randomly to 4800 men and women voters in the age group 18-60 years.