Samsung Galaxy S20 FE brings flagship features at an affordable price. But should you pick one up for Rs. 49,990? Find out in this review.

Samsung is apparently not done releasing flagship smartphones, with the Samsung Galaxy S20 FE being the latest addition to its stack. The phone is a special release of sorts, bringing some of the best that Samsung has to offer, in a package that the company is positioning as more affordable in comparison to their other flagships. Does the S20 FE live up to the expectations of the price tag? Here’s the answer

Samsung Galaxy S20 FE sports a 6.5-inch Super FullHD+ Super AMOLED display with 120Hz refresh rate. The Indian variant of the smartphone is powered by the Exynos 990 SoC. The dual-SIM handset packs in up to 8GB of RAM and 256GB of onboard storage. All of this is backed by a 4,500mAh battery with support for 25W fast charging. However, the box includes only a 15W fast charger.

On the camera front, the Samsung Galaxy S20 FE features a triple-camera setup at the back featuring a 12MP ultra-wide-angle lens, a 12MP wide-angle lens and an 8MP telephoto camera. Upfront, the phone sports a 32MP selfie shooter.

The Samsung Galaxy S20 FE utilises a newer design in comparison to the original S20. Gone is the curved display and the glass back, replaced with a flat panel and a polycarbonate back. There’s been a lot of debate about Samsung using polycarbonate on premium smartphones, but in truth, it doesn’t feel cheap. The Cloud Mint colour that we got for review looks really nice and the smooth, matte finish on the back feels soft to the touch. 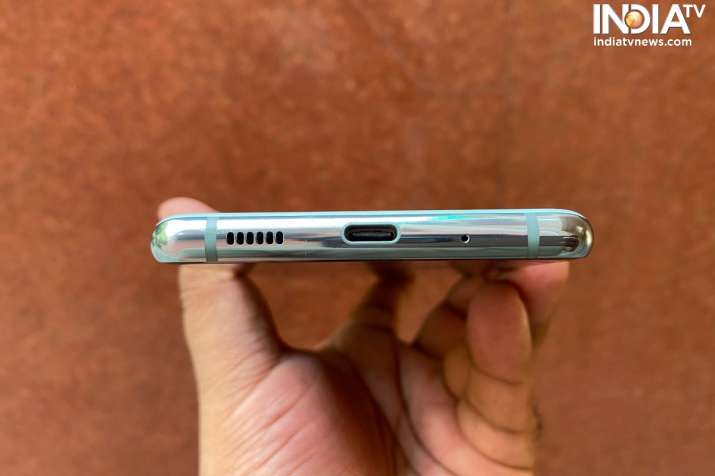 The 6.5-inch flat display is easy to use if you have decently sized hands and making things a little easier is the fact that all the relevant buttons such as volume control and power are all on the right side of the frame. Lastly, the smooth surface of the back is broken by only the very big camera module that houses the triple camera setup. Overall, this is a design very familiar to the S20 series, but at the same time, different from what Samsung has done with their flagship smartphones for the last many years.

High refresh rate display makes its way to the S20 FE. While the resolution is 1080x2400, you do get a 120Hz panel with support for HDR10+. Frankly, this is a gorgeous display and feels every bit as nice as you’d expect from Samsung. The high refresh rate does add a lot of smoothness to OneUI. Daylight legibility is excellent, and there’s no washing out of the colours. 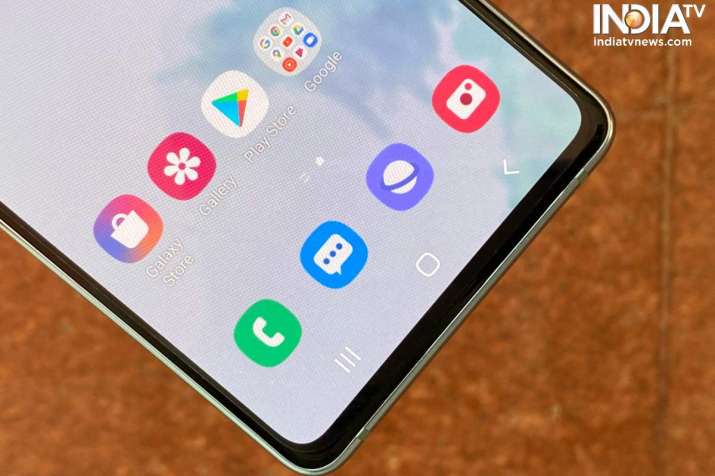 The display feels a little on the cooler side in terms of white balance but thankfully, OneUI offers a setting to adjust the saturation and colour balance of the screen. If you’re picky about the display and its white balance settings, you won’t be let down at all.

The Samsung Galaxy S20 FE comes powered by Samsung’s Exynos 990 SoC, which is fabricated on the 7nm+ process. The review unit we received comes with 128GB storage and 8GB of RAM. At first, you may feel sceptical about Samsung using Samsung S20 FE using the Exynos chipset instead of Snapdragon, but honestly, you won’t really feel like you’re getting the short end of the stick. In day to day usage for social media, messaging and calls and even taking photos and videos, you won’t notice any kind of problems. However, you might find some difference is in gaming. While playing CoD Mobile and ShadowGun, there are instances when the game suffers frame drops.

Another area of performance where the Samsung Galaxy S20 FE suffers greatly is thermals. The phone heats up a lot, perhaps an issue that’s isolated to our unit. While setting up the phone and transferring data from my main phone, the phone got so hot that it had to shut down the Samsung SmartSwitch app. At another point, the phone had to shut 3DMark down, which wasn’t even half-way through its run. There’s definitely overheating happening, but thankfully, such incidents prompt the SoC to shut the app down and not the phone. Another thing that’s definitely problematic is that all this heat isn’t just felt by the apps. Your hands, if around the camera module, are going to feel the heat as well. Despite resetting the phone twice, the heat issue continued to happen. 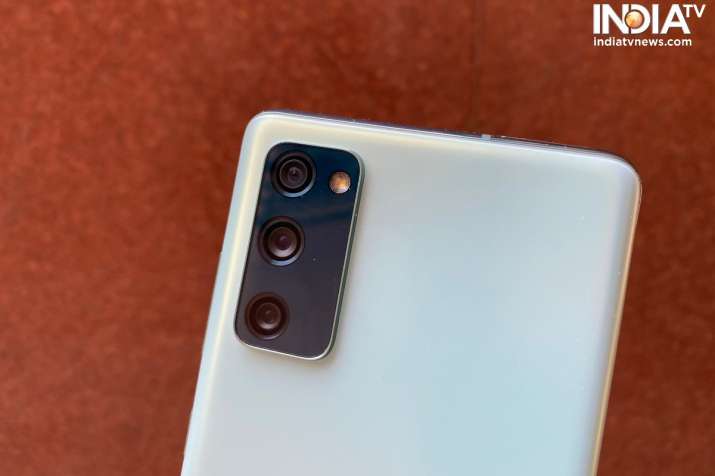 When shooting in good light, the three cameras produce crisp, sharp images with good dynamic range. The ultra-wide-angle lens doesn’t have a lot of distortion, but only if you enable the correction. The telephoto lens offers a 3x zoom with an aperture of f/2.2 which is alright for day time, but as soon as its evening, the telephoto switches over the main camera, resulting in notably reduced image quality. This is a pretty standard practice in the smartphone world, so we won’t be faulting Samsung for it.


What is missing, however, is the 8K video recording. Samsung made a huge deal of it with the launch of the S20 series, but it is missing in the FE, something that’s expected. Frankly, the S20 FE offers a great imaging experience. Samsung may not have plastered high megapixel sensors in the S20 FE, but it is still a reliable shooter. Remember, up until the Note 10 Plus, Samsung had stuck with 12MP sensors and managed to produce stellar images.

The Samsung Galaxy S20 FE houses a 4,500mAh battery and supports 25W fast charging. While the battery itself is fairly large, the charging is frankly painfully slow. The phone’s charging slows down as you reach a higher number, with the phone taking close to 2.5 hours to charge from 0 to 100. In a time when phones are charging at 60W, Samsung’s premium phones sticking to a sad 25W just doesn’t cut it. The phone’s battery itself just barely gets to the end of the day with heavy use. 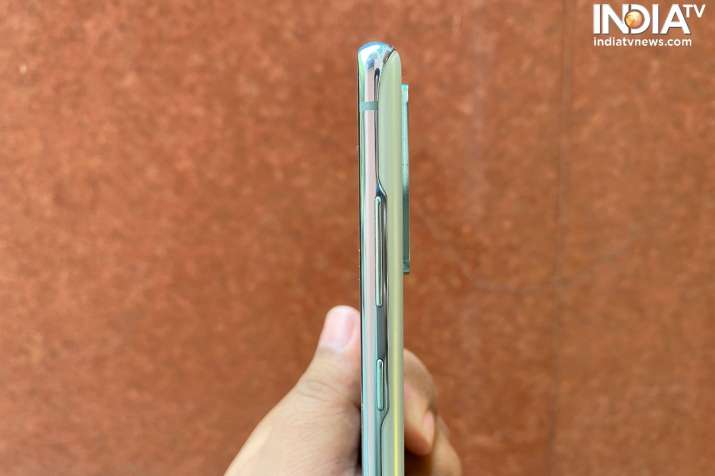 Thankfully, it supports wireless charging so you can always have it be charging on a wireless charging pad. Frankly, the battery setup on the S20 FE is just about okay, and nothing spectacular. It won’t let you down if that’s what you’re worried about.

At Rs 49,990, the Samsung Galaxy S20 FE makes a very interesting case for itself. It features practically every feature you’d want in a flagship. Great cameras, great display, and ample processing power. Where it loses is the heating issues we faced with the phone, and the fact that the Mali GPU on Exynos just cannot match the power of Snapdragon’s Adreno. One great thing you’ll find on the S20 FE is a microSD card slot, something that Samsung tends to remove when it launches a “lower tier” variant of a flagship phone. We saw Samsung cripple the Note’s storage this way, removing the microSD Card slot from the normal-sized Note 10 and the Note 20. Thankfully, that’s not the case here. Honestly, the S20 FE for Rs 49,990 is a little on the pricier side, especially considering that the S20 is priced very similarly, but if you can find a deal that lowers the price, it’s a pretty decent purchase.