With the rising weight on the spec sheet, comes an equally hefty price. At Rs. 97,999, should you be picking up the Samsung Galaxy S20 Ultra? Let’s find out.

Samsung kicked off 2020 with the launch of its best flagship smartphone till date, Galaxy S20 Ultra. This spot will soon be taken by the premium Galaxy Note 20, when Samsung decides to launch it. Until then, the S20 Ultra is the best you can get from it.

In order to live up to the tag line of the 'best Galaxy S ever', the company has maxed out everything from the cameras to the display. With the rising weight on the spec sheet, comes an equally hefty price. At Rs. 97,999, should you be picking up the Samsung Galaxy S20 Ultra? Let’s find out.

Before we begin with the review, I would like to add that with the ongoing COVID-19 pandemic, a bit of my excitement about using the S20 Ultra was gone. As I would not have been able to use the 108MP 100x zoom camera setup at the back to its fullest. Nevertheless, here’s what I found out in almost a month-long period using the Samsung Galaxy S20 Ultra:

In India, the Galaxy S20 Ultra is available only in the 4G variant and it comes with 12GB of RAM and 128GB of onboard storage. The storage is further expandable up to 1TB using a microSD card. Out of the box, the smartphone runs on Android 10 based One UI 2.1. Under the hood, there is a massive 5,000mAh battery, which supports 45W fast charging. The handset also supports wireless and reverse wireless charging.

As for the optics, the flagship smartphone features a 108-megapixel wide-angle camera, a 48-megapixel periscope camera with 100x zoom support, 12-megapixel ultra-wide lens and a 0.3-megapixel depth sensor.

Samsung was one of the first companies to provide customers with curved AMOLED displays. And it has been doing so for a long time. However, the S20 series as a whole has let this feature go, for achieving a lower rate of mistouches. But, that just took the appeal the S-series and the Note-series (especially the Note 8) had for me. Having used the Galaxy S8 and the Galaxy Note 8, I personally feel that the design was much better back in 2018. 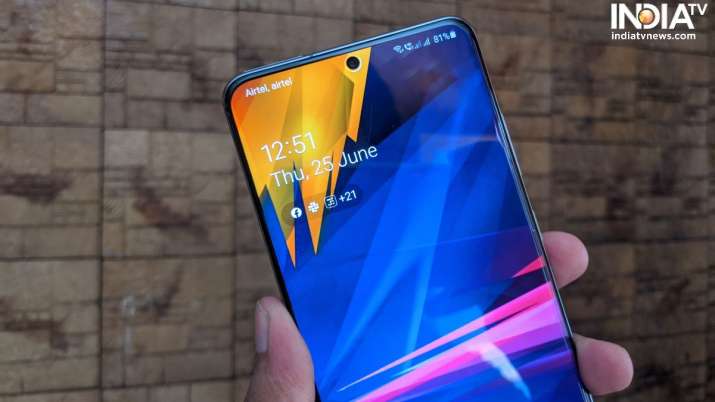 As for the handset itself, it looks and feels huge, bulky, and hefty. But that is what you get when your phone’s name comes with the ‘Ultra’ moniker. The Galaxy S20 Ultra has the biggest display the company has ever included on a smartphone. Yes, even bigger than the Galaxy Note series and significantly larger than the Galaxy Mega series (remember that phablet?).

Samsung Galaxy S20 Ultra is available in two colourways: Cosmic Black and Cosmic Grey. We had the latter. In both the colours, the Galaxy S20 Ultra looks like a plain slab of glass with a humongous camera setup.

Coming back to the display, it is hands-down one of the best panels I have tried out till date including my last daily driver that I bought, the Galaxy S8. It hurts me to say but this is miles better and I have to commend as to how far Samsung has come. The colours are vibrant and the AMOLED panel brings in deeper blacks. It gets fairly bright outdoors making it easy to use even on hot sunny days (I kind of miss going out now). 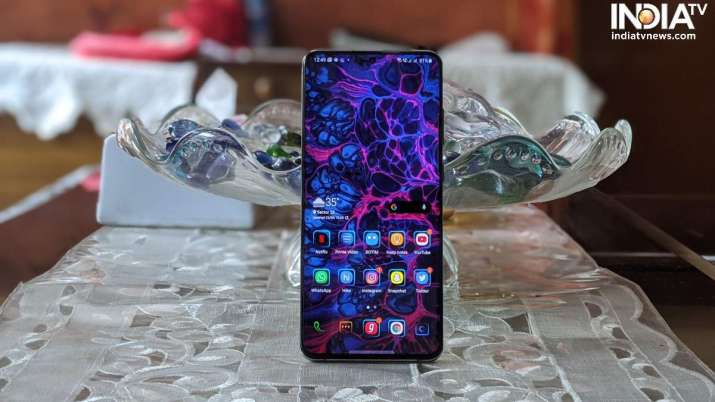 By default, the display was set at full HD+ and the refresh rate locked at 60Hz, which honestly was a bummer. This is done to extend battery life, but it does not allow the user to enjoy every penny they spent on the phone. This is why the first thing I did after setting up the phone was to switch to 120Hz. I could not use both 120Hz and the QHD+ resolution together, due to the device's software limitations. But, personally, I would give up a few pixels for that ultra-smooth experience.

On paper, the flagship smartphone is impressive, and the numbers did churn out well in real life too. I got some really remarkable results on benchmarking apps like 3D Mark, PC Mark and GeekBench. It was not only the artificial numbers that impressed me but also the usage. 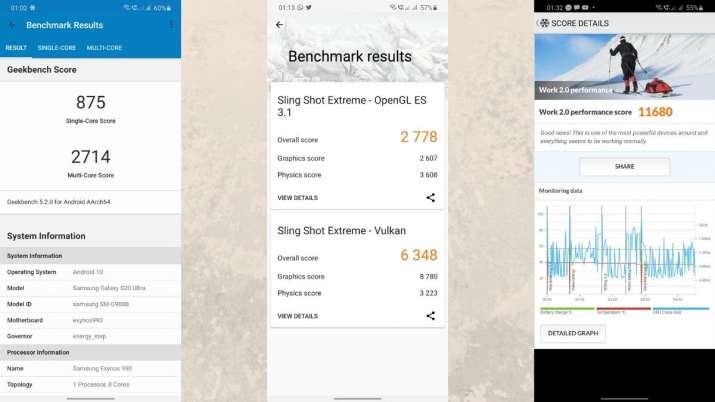 No matter what I threw at it, the phone just did not show signs of any lag or stuttering. And thanks to the 12GB of RAM, I almost never had to reload an app I used on a regular basis.

When it came to gaming, the Galaxy S20 Ultra was able to crunch through everything including the graphic demanding AAA title, PUBG Mobile. I even played Call of Duty: Mobile and Forza Street on the smartphone. None of these games showed any signs of lag even at the highest graphics settings.

Samsung Galaxy S20 Ultra features a stereo speaker setup. This does help a bit in enhancing the content streaming experience. However, during my usage, at higher volumes, I could sense vibrations, which were really disturbing. For that reason, I often switched to a pair of earphones.

On the software front, the Galaxy S20 Ultra runs One UI 2.1 based on Android 10 out of the box. The whole software experience was smooth and Samsung does add in a lot of room for customisations. Features like system-wide dark mode, always-on display, among others did elevate my experience with the flagship smartphone.

Also Read: Samsung Galaxy Note 10 Lite Review: If you have ever used a Note, you'll love this one

Adding on to the experience, the company also included Samsung Dex support. It basically allows users to hook up a monitor to the Galaxy S20 Ultra and make it act like a proper PC. Additionally, the handset can connect to a laptop and bring the Dex experience there as well. With this, the user will be able to carry all their data right in their pocket.

With the Galaxy S20 Ultra, Samsung has majorly focused on the camera performance. It houses a quad-camera setup at the back consisting of a 108-megapixel primary camera, a 12-megapixel ultra-wide-angle lens, 48-megapixel periscope camera and a depth vision camera. Upfront, there is a 40-megapixel selfie snapper. 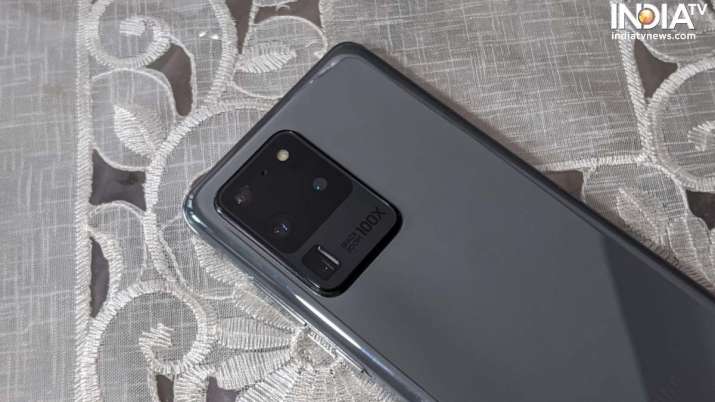 The primary 108MP camera takes some really impressive pictures. In the true Samsung fashion, the images do get a bit saturated but that is what a lot of people prefer as they become more appealing to the human eye. Also, the images were well-detailed and are great for edits on softwares like Adobe Lightroom and Photoshop.

The star of the show here has to be the 100x zoom capability. In my time with the device, the one time I thanked for having this feature was at the time of Lunar Eclipse, when I clicked photos of the moon. With the help of a tripod, I was able to get some really impressive shots. Without the tripod, I would say it is better limiting yourself to 30x zoom.

While the 100x zoom feature is good to have, it is only till 30x that we get some really sharp looking pictures. In the viewfinder itself, while taking a 30x or higher shot, you will notice the grain in the pictures. However, Samsung has really worked on their image processing, which makes the pictures look relatively better once they have been processed.

The Samsung Galaxy S20 Ultra also comes with Single Take, a feature that basically allows users to tap the shutter button once and get the best shot along with a video clip and a few other shots that the AI feels should be bundled up.

As for the front camera, the smartphone did manage to take some good looking shots. By default, it had the Beauty mode turned on, which softened the skin tone. Upon turning that off, I was able to take some decent pictures.

With a massive 5,000mAh battery under the hood, one would think that the phone can last long. However, the large display should also be accounted for. When combined with high-performance internals, the battery falls extremely short. During my usage, I was just able to get through a full working day and not more than that. Plugging the phone off the charger in the morning at around 10AM, the phone usually got hungry for more power at around 11PM.

Samsung Galaxy S20 Ultra is a flagship smartphone made for the people who want the best that is available. It is also a great smartphone for the camera enthusiasts out there, who like to do a lot more than just point and shoot. With the plethora of features, the phone does bring in a premium price tag. 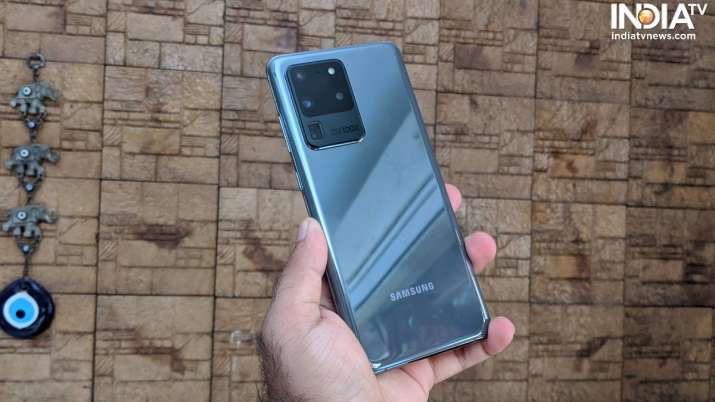 While the phone is able to justify that price, it is not a phone made for everyone. In case you have that kind of money to shell out, I would recommend sparing some more cash and going in with the Galaxy Z Flip instead as it manages to stand out of the crowd.

However, if you do not want to spend that much and still want a Samsung flagship experience, you can rather go in with the Galaxy S20 or S20+, both of which offer a similar experience in a relatively smaller form factor.

Regardless, the Galaxy S20 Ultra is a true flagship. And for now, this is the best you can get. So, if you like the amount of features it has to offer and you have the money to spend, the phone will serve every penny right.