Five times just two points from defeat in a swirling wind, Osaka held it together enough to overcome all of those miscues and stretch her winning streak at majors to 15 matches by beating Schmiedlova.

Naomi Osaka's body language made her plight plain. For all she's already accomplished, the internal pressure stemming from aiming to do even more was ruining her debut as the No. 1 seed at a Grand Slam tournament.

Fed up with her poor play in a first-round match at the French Open — errors off Osaka's racket gave her opponent her first 30 points Tuesday — she missed yet another shot. She was within a game of losing. Osaka wheeled around to look at her box and display what seemed to be a sarcastic thumbs-up.

French Open 2019: Bopanna and Copil upset sixth seeds to advance to second round

"Definitely sarcastic. I was kind of thinking: 'Do you guys see this amazing tennis I'm playing right here? Thumbs-up.' I don't even know what I wanted them to do. I felt kind of bad after I did it. It was more like I had to put my emotions somewhere," Osaka said. "It's one of those matches where you're not playing well, but you have to find a way to win. For me, I've just begun learning how to do that."

Five times just two points from defeat in a swirling wind, Osaka held it together enough to overcome all of those miscues and stretch her winning streak at majors to 15 matches by eventually beating 90th-ranked Anna Karolina Schmiedlova of Slovakia 0-6, 7-6 (4), 6-1.

As she got going, Osaka delivered a pinpoint cross-court forehand that was too hard to handle, then looked at her box again, this time with a pumping clenched left fist. Afterwards, she acknowledged having jitters as she pursues a third consecutive major title while topping the seedings.

"I feel like I'm thinking too much about the number next to my name right now, instead of feeling free and having fun like I normally do in Grand Slams," Osaka said. "The reason that I wasn't moving my feet is that I was super nervous, super stressed." 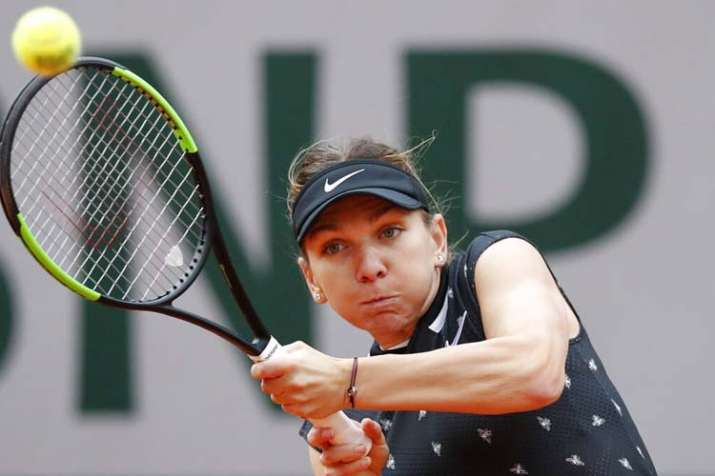 Starting her first defense of a Slam title, she also turned in an uneven performance and needed three sets to get by, topping 47th-ranked Ajla Tomljanovic 6-2, 3-6, 6-1.

"I need to be calm. Just focused on my game. Not thinking about my opponents and not thinking about the result," said Halep, who was a runner-up twice in Paris before earning the trophy in 2018.

Clay has never been Osaka's best surface; her power-based style is more suited to hard courts, such as those at the U.S. Open, which she won last September, or the Australian Open, which she won in January to become the first tennis player from Japan to be ranked No. 1.

Her only first-round exit in 13 appearances at majors came at the French Open two years ago. The only 6-0 Grand Slam set she has lost came Tuesday.

Yet after having a career record of 9-11 on clay entering this season, she is 8-1 on the slow stuff in 2019. She talked about feeling more and more comfortable on the surface and assured everyone that the abdominal and thumb injuries she'd dealt with in recent weeks were no longer any issue.

But nothing seemed right at the outset against Schmiedlova, who has never been past the third round at a major and is 6-15 in openers.

Schmiedlova's first 30 points came via 18 unforced errors and 12 forced errors by Osaka — and zero winners of her own.

By the end, Osaka won despite 38 unforced errors, 24 more than her foe.

She'll probably want to play better in her next match, against two-time Australian Open champion and former No. 1 Victoria Azarenka.

"It's going to be exciting for me," said Azarenka, who eliminated 2017 French Open winner Jelena Ostapenko 6-4, 7-6 (4). "I love to challenge myself against the best players."

Osaka appeared to be finding her groove ahead 3-0 in the second set.

That's when the day's off-and-on rain returned briefly in the form of sprinkles. Spectators popped open umbrellas and the players covered themselves with orange tournament towels while waiting on their sideline seats, before heading off court for about five minutes.

In all, the delay was less than 10 minutes — play continued elsewhere — so there was no warmup when they returned. The respite served Schmiedlova well: She suddenly produced her very first winner with a 96 mph (155 kph) serve to get within 3-1, then made it 3-all.

Schmiedlova served for the match twice. At 6-5, 30-15, and again later, she was two points from pulling off what would have been only the second first-round upset of the women's No. 1 seed in French Open history.

This is what Osaka said was running through her mind: "Can I sleep at night, knowing that I maybe could have done something more?"

Schmiedlova couldn't close it out. Osaka wouldn't let her.