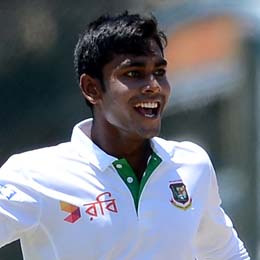 At the age of 19, Mehidy Hasan had a five-wicket Test haul and this youngster is a star in the making for the Bangladesh Cricket team. At a raw age of 16, Mehidy played in the U-19 team for Bangladesh and soon enough he grabbed headlines in his first-class performances. He racked up 30 wickets at an average of 16.43 in the first season itself, which brought him a call to the Test squad against England. He made his Test debut in October 2016 at Chittagong was a part of the Bangla squad which defeated England for the first time in Test history. He picked up a maiden fifer and was awarded the Man of the Match and Man of the series as well. He represented Rajshahi Kings in the Bangladesh Premier League, finishing runners-up. Mehidy played a crucial role for Bangladesh in Test cricket as they won a Test series in Sri Lanka and Australia at home. He has shined in Tests than the limited-overs format and at still a young age, Mehidy can be an asset for Bangladesh.