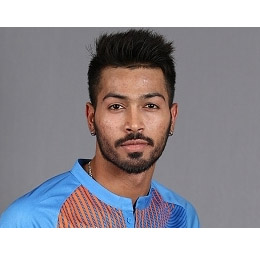 Often being compared with India’s World Cup winning captain and all-rounder Kapil Dev, Hardik Pandya has substantiated the comparisons on many occasions with his hard-hitting abilities and brisk seam bowling. Along with his playing style, his experiments with hairstyles and hair colours make him stand out among his peers. But he plays as flamboyantly on field as he carries himself off the field. Pandya is truly a find of the Indian Premier League (IPL) as his heroics with Mumbai Indians booked his berth for the Indian cricket team. Following a successful IPL 2015 and Syed Mushtaq Ali domestic T20 tournament in 2016, the Gujarati all-rounder made his debut for Team India on January 26, 2016, in a T20I match against Australia at Adelaide. It took him a few months to break into the 50-over set up as he debuted in ODI cricket on October 16, 2016, playing New Zealand at the picturesque HPCA Stadium, Dharamsala. With a fifty on his Test debut, Pandya played his first longest-format game for India on July 26-29, 2017, against Sri Lanka at Galle.

Mumbai Indians beat Kolkata Knight Riders by 9 wickets to reach the playoffs as the No.1 team from the group stages

Virat Kohli kept up his brilliant summer form by hitting 103 before setting England a world-record target of 521 to win the third Test.

India tightened their grip on the third Test on Sunday by taking 10 England wickets in one session before reaching 124/2 at stumps.

The Indian vice-captain made a target of 199 look ridiculously easy on a small Bristol ground after the visiting bowlers did a commendable job at the back end to restrict the hosts to a sub-par score.

Actress Elli Avram can be seen hiding her face from paparazzi as she was spotted with rumoured beau Hardik Pandya.

Though Elli AvRam and Hardik Pandya have maintained their silence on their relationship status, their frequent spottings together reveal a lot.

Philander claimed six wickets as South Africa bowled out India for 135 in their second innings.

In the World T20 2016, there have been some jaw-dropping catches. Here are the top five catches in the World T20 that are sure to leave you spellbound.