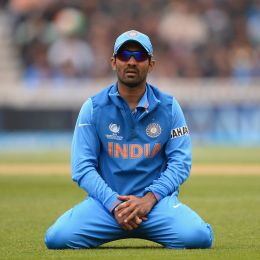 Despite having accumulated a lot many runs in domestic cricket, Dinesh Karthik’s struggle to enter and remain in the Indian cricket team dressing room has been ever going. The emergence of MS Dhoni overshadowed Karthik, who was probably the more technically sound wicketkeeper during that period. However, the Test retirement of Dhoni in 2014 also couldn’t hand Karthik a comeback as Wriddhiman Saha was a better equipped stumper and a bankable option in the longest format of cricket. Karthik made his international debut on September 5, 2004, in an ODI match against England at Lord’s. Dhoni, on the other hand, got a chance on December 23, 2004, when he played his first ODI match for India during their tour to Bangladesh. Karthik debuted in Test cricket on November 5, 2004, in a match against Australia in Mumbai. A T20I breakthrough came for the Tamil Nadu batsman in December 2006 during India’s tour of South Africa. When everything seemed unsatisfactory in Karthik’s cricket career, he just did a Javed Miandad, scoring a last-ball six to guide India to Nidahas Trophy win in 2018.

Dinesh Karthik smashed a career-best 97 not out off 50 balls for KKR but late fireworks from Riyan Parag and Jofra Archer sealed the deal for Rajasthan Royals in Kolkata.

India ended a four-match winless run against the West Indies with a five-wicket victory.

Kolkata Knight Riders beat Rajasthan Royals by 25 runs in the Eliminator to set-up the IPL Qualifier-II clash with Sunrisers Hyderabad.

Left-arm wrist spinner Kuldeep Yadav starred with an impressive four-wicket spell as he set up Kolkata Knight Riders to a comfortable six-wicket win over Rajasthan Royals in their Indian Premier League encounter at Eden Gardens on Tuesday.

Opener Chris Lynn played an unbeaten knock of 62 to power Kolkata Knight Riders to a clinical six-wicket win over Royal Challengers Bangalore in match 29 of IPL 2018 at the M.Chinnaswamy Stadium.

Kolkata Knight Riders (KKR) stretched their winning run to two games by registering a facile seven-wicket victory over Rajasthan Royals in an Indian Premier League (IPL) encounter at the Sawai Mansingh Stadium in Jaipur on Wednesday.

Kolkata Knight Riders opened their campaign with a win as the hosts defeated a Virat Kohli led Royal Challengers Bangalore at Eden Gardens.