After critically analysing all the major english newspapers, IndiaTVnews.com brings to you the top 6 headlines to show you how the Indian print media reacted to Maharashtra's big political twist on November 23 which saw Devendra Fadnavis swearing-in as Maharashtra CM and NCP's Ajit Pawar as his deputy.

Frontpage headlines across the country on Sunday carried matter-of-fact tones as well as those of disbelief and sarcasm, a day after morning newspapers were caught on the wrong foot following an overnight change in the political developments in Maharashtra.

Newspapers on Saturday morning had carried headlines declaring Shiv Sena leader Uddhav Thackeray to be the next Maharashtra chief minister.

However, the political scenario in the state had already changed by the time the dailies arrived to people's doorsteps, with BJP's Devendra Fadnavis making a sudden come back as the CM.

Given the previous day's political shocker, Sunday's front-page headlines across the country played with words to describe the surprise element of the situation.

After critically analysing all the major english newspapers, IndiaTVnews.com brings to you the top 5 headlines to show you how the Indian print media reacted to Maharashtra's big political twist on November 23 which saw Devendra Fadnavis being sworn in as Maharashtra CM and NCP's Ajit Pawar his deputy.

The Times of India

The Times of India on its Sunday edition 'Sunday Times' started by giving a reference of the first Day-Night test between India and Bangladesh that ended earlier today. "The Read Day-Night Test Is In Mumbai," TOI's headline said. The English daily then went on to explain the series of events that led to the surprise swearing-in of Devendra Fadnavis. 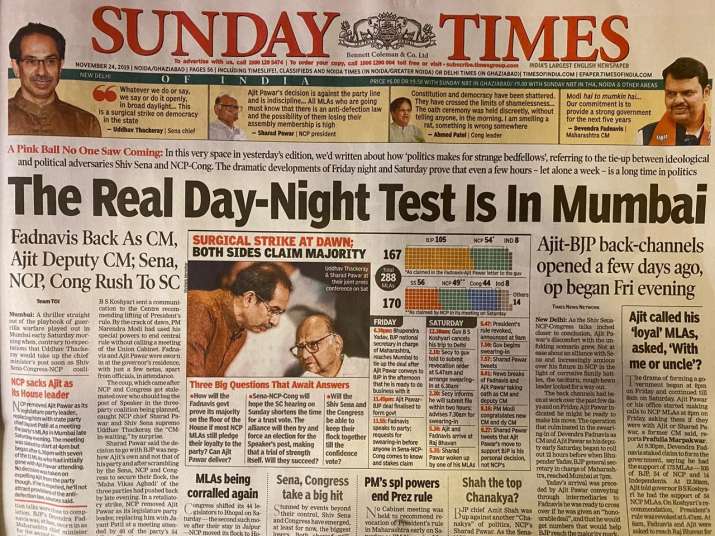 The Hindu on their front page wrote, "Fadnavis Sworn in as CM after Ajit Pawar ditches uncle". The Hindu gave more prominence to Ajit Pawar's decision to split the NCP by ditching his uncle Sharad Pawar. The newspaper also had an image of CM Devendra Fadnavis with Ajit Pawar and Governor Bhagat Singh Khoshiyari on their front page. 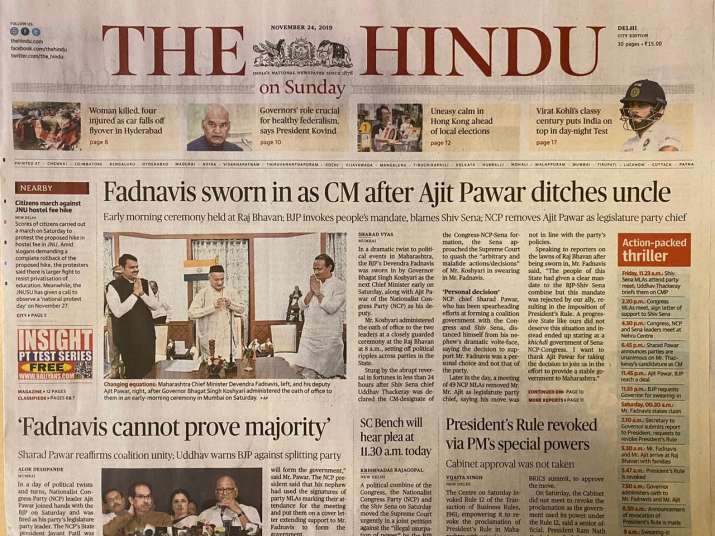 Indian Express' Sunday edition -- The Sunday Express had the headline -- While you were sleeping.

The newspaper focused on the dramatic twist at hand in Maharashtra government formation. It also stressed on the Supreme Court which was going to hear the plea of Congress-NCP-Shiv Sena today at 11:30 am. 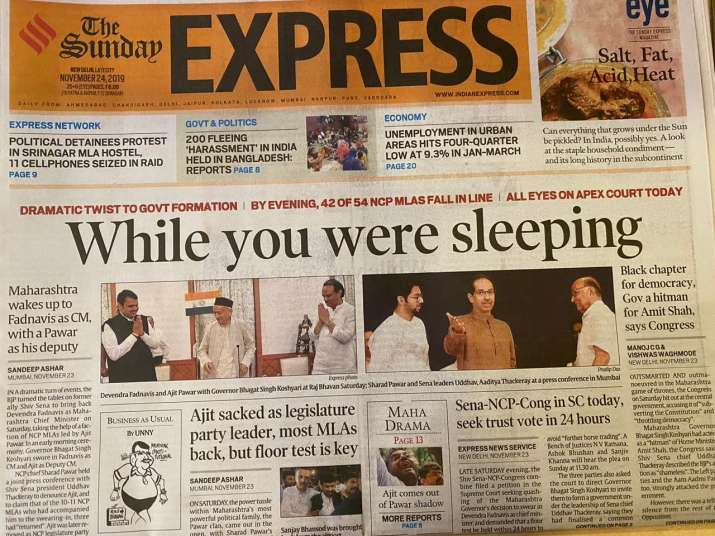 The Asian Age had by far the most vibrant headline. The newspaper wrote on its front page "WTFadnavis". The newspaper then went to call the midnight proceedings a coup, "Midnight coup: Ajit Pawar rebels, ditches uncle to back BJP govt". It had images of Prime Minister Narendra Modi, Home Minister Amit Shah and Congress President Sonia Gandhi besides Devendra Fadnavis and Ajit Pawar. It also had an image of Sharad Pawar and Uddhav Thackeray. 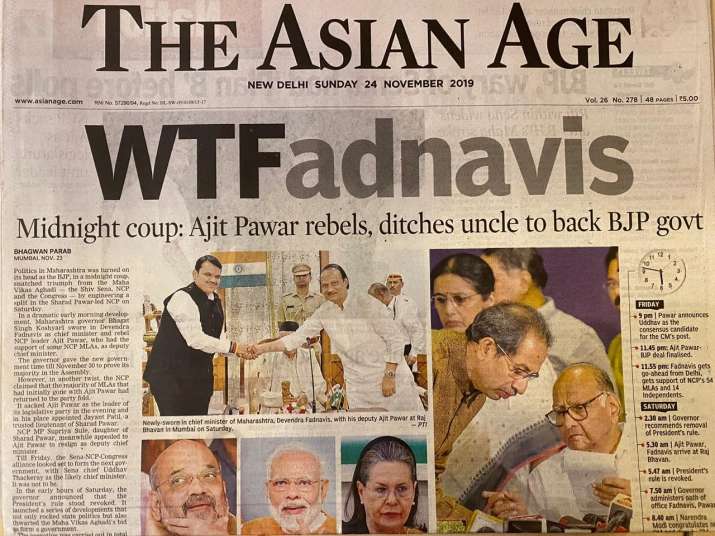 The Sunday Standard used a more conventional headline. "Fadnavis Back But Maha Drama Not Over."

The newspaper also focused on the timeline of events that happened throughout the night. It also had a poetic touch to Ajit Pawar's part of the story. "With future bleak, Pawar takes a leap," said the English daily. 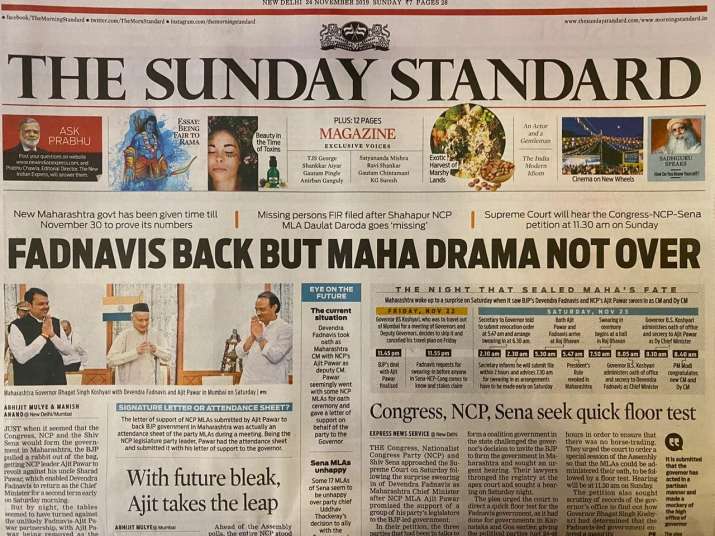 Hindustan Times' story on the political twist ran with "Maharashtra drama continues: Fadnavis is CM, Ajit his deputy". It focused on NCP's meeting in the evening of November 23, where Ajit Pawar was sacked as the legislative party leader and Jayant Patel was chosen as his successor. 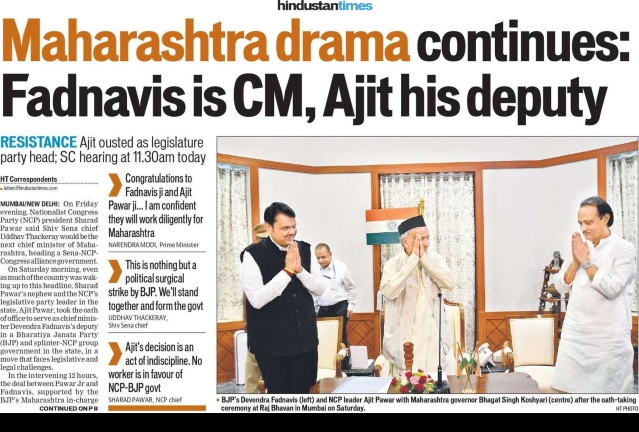