Here's why Trump did not visit original graves of Shah Jahan, Mumtaz at Taj Mahal

Amid expectation that the president would be ferried to Taj in his armoured car, the 'Beast', he arrived at the Taj in another vehicle, a senior Agra district government official said, adding, the famed limousine was not part of the convoy.  The family spent about an hour in the Taj complex before heading back to the Kheria airbase on way to Delhi.

US President Donald Trump and First Lady Melania Trump on Monday evening visited the iconic Taj Mahal as they marvelled at the famed 17th-century Mughal-era mausoleum built as a monument of love. The couple took a stroll in the resplendent gardens by the reflecting pool of the celebrated monument, holding hands as a cool breeze made their experience even more pleasant. Trump was dressed in a dark suit with a tie of light shade while the first lady wore a white dress accessorised with a green waistband.

Daughter Ivanka and son-in-law Jared Kushner, accompanying the President during the visit, also enjoyed the architectural glory of the famed mausoleum.

Ivanka, wearing a white dress with red floral print with matching red shoes, and Kushner in a suit, also took a stroll. She also captured the moments in her mobile phone and took solo pictures too against the backdrop of the Taj.

"The grandeur and beauty of the Taj Mahal is awe inspiring!," she tweeted and shared pictures.

Trump, who is on his maiden two-day state visit to India, however, didn't go to see the original graves of Mughal ruler Shah Jahan and his wife Mumtaz during his visit to the Taj Mahal on Monday.

According to Nitin Kumar Singh, the guide who accompanied Trump and his wife Melania in the tour of the historic monument, Trump was totally amused by the beauty of Taj Mahal. However, he didn't go to see the original graves of Shahjahan and Mumtaz as his security personnel felt that he might get hurt as the way to the original graves is narrow and low in height.

Trump is 6 feet 3 inches tall, hence the personnel deployed for his security advised him not to visit the graves.

Trump, accompanied by his wife, daughter and son-in-law, arrived in Agra at about 4:30 pm and reached Taj close to 5 pm. 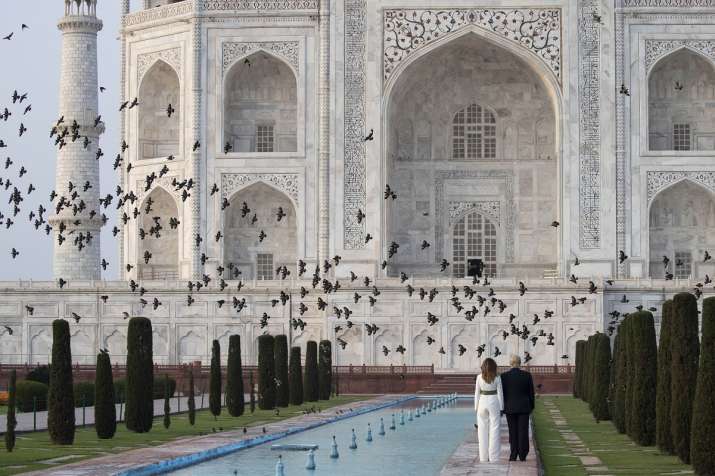 Amid expectation that the president would be ferried to Taj in his armoured car, the 'Beast', he arrived at the Taj in another vehicle, a senior Agra district government official said, adding, the famed limousine was not part of the convoy.

The family spent about an hour in the Taj complex before heading back to the Kheria airbase on way to Delhi.

US President Trump on Monday also joined the long list of world leaders who have visited Taj Mahal as he kept his sunset date with the famed mausoleum that has attracted admirers from across the globe.

After Dwight David Eisenhower (1959) and Bill Clinton (2000), he became the third US President to visit the 17th-century architectural icon.

Taj Mahal, which was built by Mughal Emperor Shah Jahan in memory of his wife Mumtaz Mahal who died in 1631, was refurbished for the visit.

President Trump and the First Lady were also briefed about the history and importance of the monument by a guide who told them its history.

The US President's visit to Agra and Taj has generated huge excitement among local residents. Some shops even displayed their own banners, welcoming Trump to India.

Trump also took to Twitter to express his sentiments about his first official visit to India, which began with a trip to Ahmedabad.

"First lady and I have travelled 8,000 miles around the world to give a message to each citizen of this country – America loves India, America respects India, and the people of America will always be true and committed friends of the people of India," the American leader tweeted in Hindi.