Actor Sunil Lahri, who played the role of Lakshman in Ramanand Sagar's Ramayan said for any Bollywood actor or actress to play the role of Ram, Sita, or Ravan, it is important to break their star image so that audience could connect with them well.

The greatest gift which Television viewers got amid the coronavirus lockdown in the country was the re-run of Ramanand Sagar's Ramayana on public broadcaster Doordarshan. Ever since it began, the fans just like the previous time went all gaga so much so that it recorded the highest TRPs for weeks. The actors who played the role of Ram, Sita, Lakshman-- Arun Govil, Dipika Chikhlia, and Arun Govil apart from the others came in the limelight and everyone wanted to know how they look now and their feeling after the show's success. Apart from this, there were many who wanted the epic to be created on the big screen including Bollywood biggies.

In the wake of the same, when actor Sunil was asked Bollywood celebrities who would fit well to the characters, he said that any big star has an image of his own and in the case of Ramayan, it becomes important for them to break their star image. Otherwise, the audience will not be able to connect with them. He also told a leading portal that the actors who were cast in Ramanand Sagar's Ramayan were not popular and this helped everyone to connect with the godly characters of Ram, Sita or Laxman. 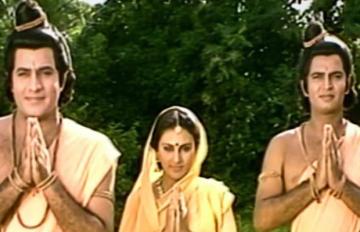 The Epic pic of the entire team of Ramayan cast and crew ,sagar Saab with his son and below them are the direction team and camera team ...barring Ravan almost all Were there .....ramayan#memorries#camera#nostalgic#1980#shivsagar#premsagar#ramanandsagar. Only wen we look back do we know what all we have left behind ....so many of the cast no more ...RIP to them all 🙏💐

Further, when he was asked about the actors and actresses who would fit well to the roles, Sunil said that according to him Ajay Devgan can play Ram's role since his face has a charismatic feel which fills the demand of the character. At the same time, Sunil Lahiri took the name of Hrithik Roshan for the role of Laxman. For Ravana and Hanuman, he refused to take the name and said that apart from Arvind Trivedi, the role of Ravana could be played well by Amrish Puri but now he is no more in this world.

Inspired by the 21 day learning challenge by Vedantu (and my little pianists at home). . So I’m on mission piano. 🎹 Ps: Great for activating both sides of the brain by the way. . Great initiative by Vedantu to spread the word on growth and learning. 👏 . #21dayLearningchallenge by @vedantu_learns. For Kids Grade 1 - 12 and those appearing for JEE & NEET. #onlinelearning #free . #keeplearning #keepgrowing #noexcuses #startnow #keepexploring #stayhome #staysafe . Photo bomb courtesy: Sussanne Khan. Currently surveying my home for design irregularities.

Talking about his choice for the role of Sita, he took the name of actresses Alia Bhatt and Deepika Padukone. Previously, actress Dipika Chikhlia, who played the role of the Goddess chose Alia for Sita, Hrithik Roshan for Ram, Ajay Devgan for Ravana, and Varun Dhawan for the role of Laxman.

Still believe in magic? Oh yes I do 🤞

Chhapaak truly has been the most difficult film of my career... Having said that,Chhapaak for me is not just a film.It is a movement;that has challenged the definition and our understanding of ‘Beauty’. Famous American Swiss Psychiatrist Elisabeth Ross said,the most beautiful people we have known are those who have known suffering,known struggle,known loss,known defeat...and have found their way out of the depths.These persons have an appreciation,a sensitivity and an understanding of life that fills them with compassion,gentleness and a deep loving concern.Beautiful people do not just happen. I dedicate tonight’s award to Laxmi Agarwal and every single acid attack survivor who on this most incredible journey have shown us all what beauty truly means! #feminabeautyawards2020

Whom do you think could fit well in the roles?