Pandya Store fame actress Simran Budharup reveals facing an online scam. She has urged her fans to be cautious while sharing details online.

People are often falling into the trap of online scams. Recently, Pandya Store actress Simran Budharup came across a similar incident and fortunately managed to save herself from it. She revealed how her promptness managed to save her Instagram account from getting hacked.  The actress also urged everyone to be cautious while sharing their details. Simran received an email from Instagram, asking her to remove a certain post owing to copyright issues.

Talking about the entire incident, the actress revealed, "One mail from Instagram of copyright on my post popped up in my mailbox. As an Instagram handler, I thought I must remove such stuff from my account and for that, I clicked on the customer service number which was mentioned in that mail."

"That number redirected me to my Whatsapp and I messaged them that I have received an email like this one. They asked me to fill one form. I opened that form and there I had to fill in my username and my password. And there was a text written which said 'Not Secure'. I wrote my password but luckily that was the wrong password. And then I felt something fishy and I called the concerned person. That's how I saved my account from getting hacked," she added.

The actress also said, "If I continue to get messages on Whatsapp then I will go to Police Station to stop this chain and to prevent people from falling into this trap.” 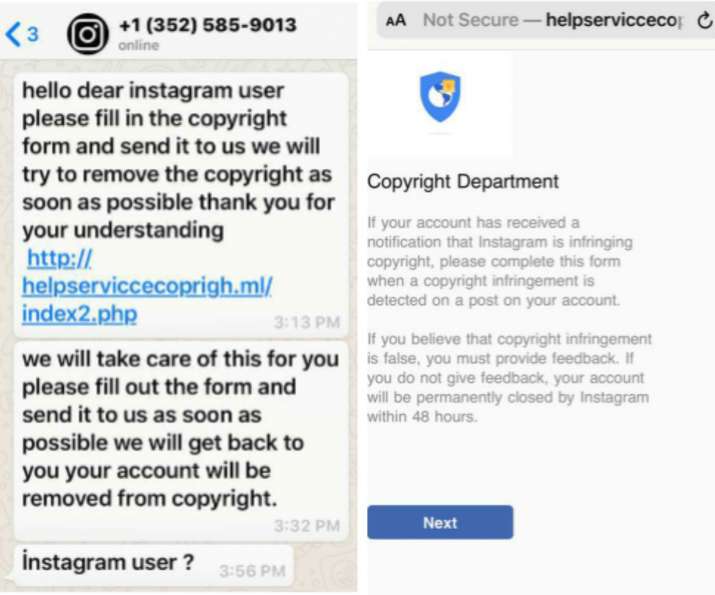 Concluding the post, Simran gave out a clear message to all the mischief-mongers, saying "People should use their brain and energy in good things. They will receive money, value, and respect as well. If they continue to do this then some or the other day they are going to fall into some deep trouble."