Sidharth Shukla is going to be the winner of the 13th season of 'Bigg Boss', IndiaTV Showbiz' poll says.

Sidharth Shukla is going to be the winner of the 13th season of 'Bigg Boss', IndiaTV Showbiz' poll says. IndiaTVNews.com conducted a poll asking people to vote for their favourites, and a major number of people voted for Sidharth. The other options were the finalists -- Shehnaaz Kaur Gill, Asim Riaz, and Rashami Desai.

In 'Bigg Boss 13', Sidharth has come to be known for his close bond with housemate Shehnaaz. They both have immensely contributed to the popularity of the show -- individually and together as '#SidNaaz'. 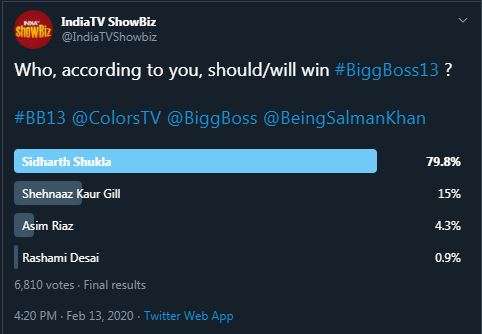 Who, according to you, should/will win #BiggBoss13 ?#BB13 @ColorsTV @BiggBoss @BeingSalmanKhan

The finale episode is being shot today. The audience will get to see several performances from the current housemates as well as from the former contestants. Rashami and Sidharth will be seen performing on 'Ang Lagaa De' from the Ranveer Singh and Deepika Padukone-starrer 'Goliyon Ki Rasleela Ram-Leela'. Sidharth will also perform on a Punjabi song with BFF Shehnaaz.