Bharti Singh gets husband Haarsh’s name tattooed on her arm as birthday gift. His reaction is the cutest

TV actress and comedian Bharti Singh had the cutest birthday gift for her husband Haarsh Limbachiyaa who turned 33 on Thursday.

TV actress and comedian Bharti Singh had the cutest birthday gift for her husband Haarsh Limbachiyaa who turned 33 on Thursday. The comedian got his name inked on her wrist and left him surprised. According to Haarsh, Bharti is even afraid of getting injections and she took this step just to show her endless love for him. Taking to his social media, Haarsh shared his happiness with the fans and wrote, “What a gift! She can’t even take injections, and she did it for me. This is the best gift from my love. Thank you so much for lovely tattoo.”

Haarsh shared the picture of Bharti’s tattoo as well which consists of his name along with two little birdies on a branch. Check out-

What a gift ❤️ she cant even take injections 😐 and she did it for me 😍 this is the best gift from my love ❤️ thankyou so much for lovely tattoo @harshbhanushali_tattooartis @parth.indianinctattoo @indianinctattoo 🤟🤟🤟👌👌👌👌

On Thursday, Bharti shared a number of photos of herself with husband Haarsh to wish him on his birthday. The actress wrote, “Happy birthday my soulmate #love #blessed #hubbylove #family #lifeline#heartbeat I love you so much! Haarsh, thank you so much for everything.”

Interestingly, on July 3, 2018, Haarsh had gotten his wife’s name inked on his chest. Haarsh’s love for tattoos is quite evident as he has many on his body, but it became special when he got inked Bharti’s name on his chest on her first birthday post their wedding. Bharti was touched by Haarsh’s sweet gesture and had posted Insta stories to flaunt her husband’s love for her! 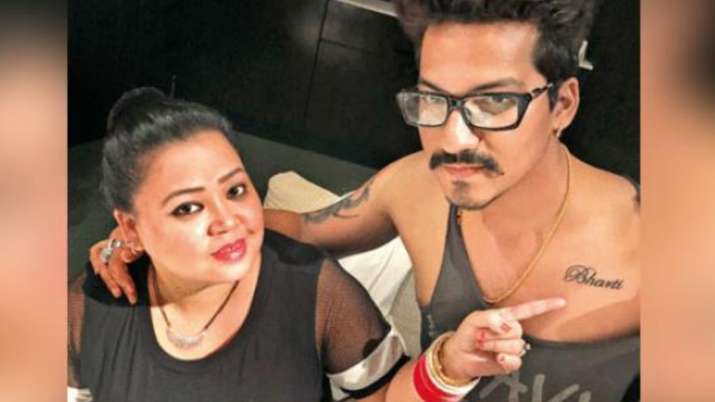 There is no denying that Bharti and Haarsh share a very close bond. The two are often seen showering love on each other on their show Khatra Khatra Khatra. Before this, they have appeared together in Nach Baliye and Khatron Ke Khiladi. Currently, Bharti is seen in The Kapil Sharma Show.

Talking about their wedding, Bharti and Haarsh tied the knot in a lavish wedding ceremony in December 2017. Their wedding was even shot as a web series and is available online.