Bollywood actress Kangana Ranaut on Tuesday (October 26) took to Instagram and informed her fans and followers that she has arrived at Andaman island for the shoot of her upcoming film, Tejas. The actress also shared that she paid a visit to the cell where Hindu Mahasabha leader Vinayak Damodar Savarkar was imprisoned at Cellular Jail in Port Blair, Andaman and Nicobar Islands.

Sharing a series of pictures Kangana wrote, "Today on arriving in Andaman island I visited Veer Savarkar's Cell at Kala Pani, Cellular Jail, Port Blair…I was shaken to the core … when inhumanity was at its peak even humanity rose to its peak in the form of Savarkar ji and looked it in the eye, faced every cruelty with resistance and determination…"

She further paid respect and gratitude to 'Veer Savarkar ji' and said, "How scared they must have been of him not only they kept him in Kala Paani in those days it must be impossible to escape from this tiny island in the middle of sea yet they put chains on him built a thick walled jail and locked him up in a tiny hole, imagine the fear as if he can fly on thin air across the never ending sea, what cowards… !! This cell is the truth of Aazadi not what they teach us in our text books …. I meditated in the cell paid my gratitude and deepest respect to Veer Savarkar ji…स्वतंत्रता संग्राम के इस सच्चे नायक को मेरा कोटि कोटि नमन. जय हिंद"

She also took to Instagram stories and shared several pictures from inside the Cellular Jail which is now open for tourists. Take a look. 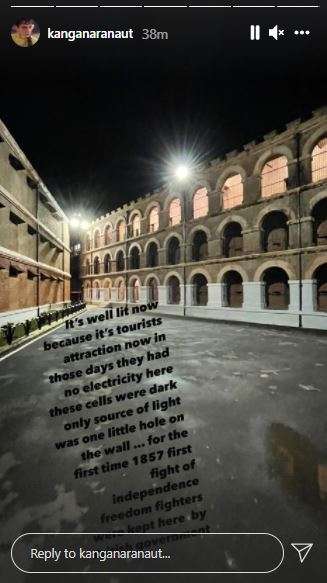 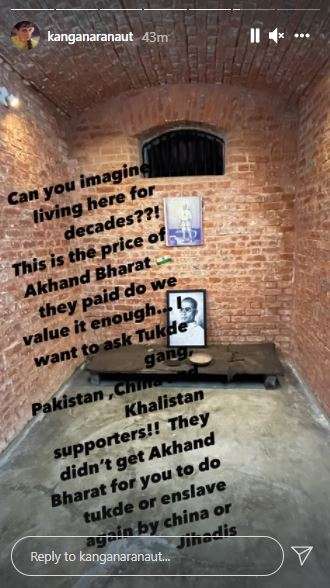 Earlier, the actress met real life Air Force officers while she was shooting for the film. She had shared pictures from the hangar where the team was shooting and met Air Force officers who landed there. Taking to Instagram, Kangana wrote, "My herogiri turned in to total fangiri when asli Air Force officers/ soldiers landed in the same hangar as we are shooting our movie Tejas...They already knew about this upcoming movie and showed eagerness to watch it ...this brief meeting was absolutely pleasant and encouraging...Jai Hind."

On Monday (October 25), the actress received her fourth National Film Award as the Best Actress for her performances in 'Manikarnika: Queen of Jhansi' and 'Panga'.

Written and directed by Sarvesh Mewara, Tejas will feature Kangana in the role of 'Tejas Gill', an Indian Air Force pilot. The Indian Air Force was the first of the country's defence forces to induct women into combat roles in 2016. The film takes inspiration from this landmark event. The film is being bankrolled by RSVP Movies, the production house that had also produced the blockbuster military drama 'Uri: The Surgical Strike'.