Celebrating her 24th birthday, Janhvi Kapoor shared a short video on her Instagram story from the sets of her upcoming film Good Luck Jerry, giving a glimpse of her delicious birthday cake that her crew had got for her.

Bollywood actress Janhvi Kapoor, who is currently shooting for her next film Good Luck Jerry, shared a glimpse of her birthday cake from the sets of the movie. Celebrating her 24th birthday, the actress shared a short video on her Instagram story, giving a glimpse of her delicious birthday cake that her crew had got for her. Expressing her gratitude for the team she wrote "thank you" along with the video. In the video, Janhvi can be seen filming her birthday cake, as she pans the camera towards one of her crew members holding a placard, with "I came for cake" written on it.

More pictures from the Good Luck Jerry sets went viral on the internet in which the actress is seen celebrating her birthday. The pictures show Janhvi posing with the crew.

Janhvi's sister Khushi also shared a throwback video of the actress to wish her. She wrote, "Happy birthday to my everything I love you always." Cousin Shanaya Kapoor also wished her sister on the occasion by sharing a collage of two photos, which showed them hugging each other. One photo showed the sisters as children while the other showed them all grown up. Along with it, she wrote, "Happy birthday @janhvikapoor love you."

Alia Bhatt also took to her Instagram story and shared a mesmerising photo of Janhvi. Along with the photo, she penned a sweet note for her that read, "Happy birthday you beautiful soul. Have the best best dayy." 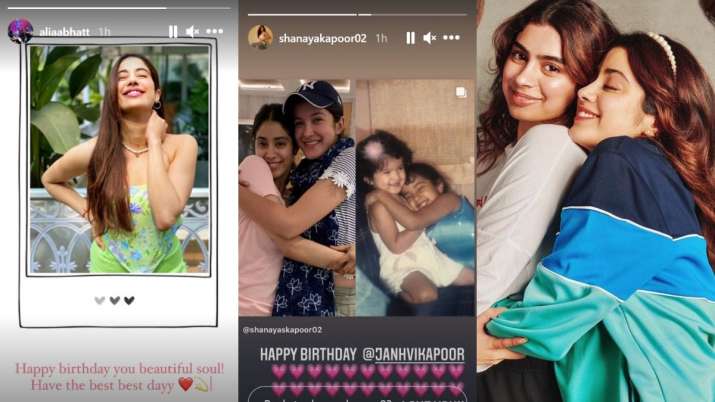 Meanwhile, on the work front, Janhvi will next be seen in 'Roohi', which is set to hit the big screens on March 11 this year. It also stars Rajkummar Rao and Varun Sharma in the lead roles. The upcoming horror-comedy will become the first film to arrive in theatres after the Ministry of Information and Broadcasting allowed cinema halls nationwide to operate at full capacity from February 1 with COVID-19 safety protocols put in place. The film is based on the lines of the 2018 hit film 'Stree', which featured Shraddha Kapoor and Rajkummar Rao in lead roles.