Tara Sutaria and Aadar Jain, who have till date not given any confirmation to the growing buzz, made it "Instagram official" on Monday.

Rumour has since long had it that Tara Sutaria and Aadar Jain are dating. The two have been spotted making appearances together at a couple of Bollywood parties -- which includes Malaika Arora's birthday bash, and Amitabh Bachchan's Diwali party. Aadar was also spotted at the screening of Tara's film Marjaavaan.

The couple, which has till date not given any confirmation to the growing buzz, made it "Instagram official" on Monday.

The couple was spotted at the U2 concert in Mumbai and sharing a glimpse of it, Aadar wrote: "When am with you'' and tagged Tara. To this, the actress replied: "Always with you." She added a heart emoticon with her words for the right mushy effect. 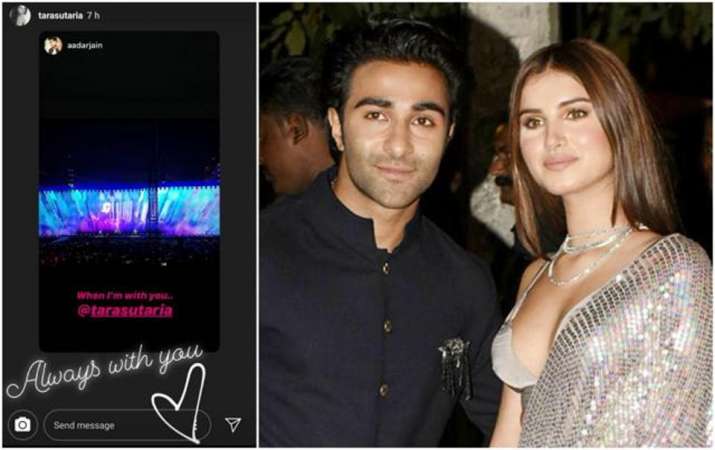 When asked about her relationship, Tara, at a recent interview, had neither denied nor accepted it.

''Well, we really enjoy each other’s company. Aadar is special to me and both of us are foodies, so we are going to be spotted at restaurants. We met for the first time last Diwali and have a lot of mutual friends,” she said.

Aadar made his Bollywood debut in 2017 with Qaidi Band. The film tanked at the Box Office.

Tara will next be seen in Milan Luthria’s Tadap, which is a remake of the Telugu hit RX 100. Tadap marks debut of Suniel Shetty’s son Ahan Shetty.