Kareena Kapoor Khan took to her Instagram and offered a glimpse of her workout that also featured her BFF Amrita Arora. Bebo dropped amazing pictures and videos with Amrita while they enjoy their online workout session.

Kareena Kapoor Khan is a stunner! Her sartorial choices are impeccable and the actress knows how to make heads turn. The actress recently returned from her Maldivian holiday with her husband Saif Ali Khan and kids, Taimur and Jeh Ali Khan. And its time for her to burn the extra calories. On Tuesday, Bebo took to her Instagram and offered a glimpse of her workout that also featured her BFF Amrita Arora.

Kareena dropped amazing pictures and videos with Amrita while they enjoy their online workout session. The BFFs were seen working out with their coach. Sharing the first picture, the actress wrote, "Gym class today". Kareena shared a video with Amrita while doing a plank. "BFFs who plank together stay together," Bebo wrote followed by heart emojis. 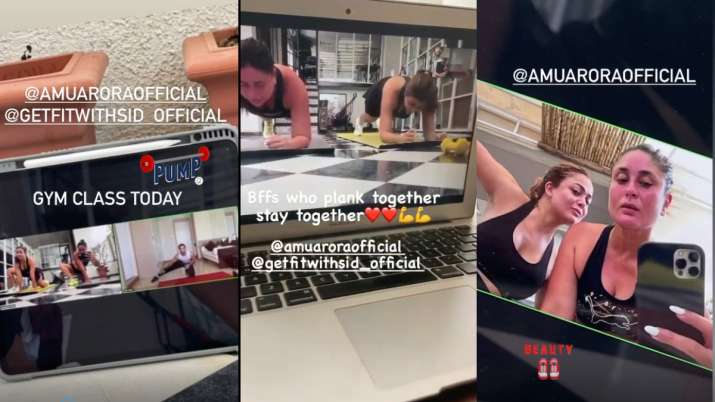 Meanwhile, Kareena recently jetted off to the Maldives to celebrate her husband’s 51st birthday. They returned to Mumbai on Sunday. And as they were leaving the airport, the paparazzi shot close-up pictures of Jeh being led away by the family help. The picture was at once splashed by the Kareena Kapoor Khan FC (fan community) on Twitter.