Actress Jacqueline Fernandez on Monday treated her fans with exciting news as she announced her association with the Akshay Kumar and Kriti Sanon starrer film Bachchan Pandey.

Actress Jacqueline Fernandez on Monday treated her fans with exciting news as she announced her association with the Akshay Kumar and Kriti Sanon starrer film Bachchan Pandey. The actress took to her Twitter account and shared a picture of herself with Akshay and wrote, "The mostttt excited today as I start shooting with @akshaykumar for #SajidNadiadwala’s #BachchanPandey directed by @farhad_samji Clapper boardFire Are you ready to meet this gang in cinemas next year?"

In the black and white picture, both Akshay and Jacqueline looked extremely gorgeous. The actress also took to her Instagram stories and shared the picture of a clapperboard which had 'Day 1 JF' written on it. Akshay and  Jacqueline were sppoteed attending a public event in Jaisalmer before they began the shoot. 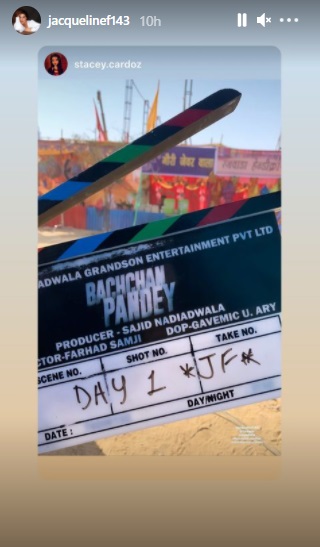 The film also stars Kriti Sanon in a pivotal role. The actress on Monday announced her wrap up from the shooting schedule.  The 30-year-old actor took to Instagram and posted the film's first look picture with Kumar. Sanon said filming "Bachchan Pandey" was one of the most memorable schedules of her career.

"And it's a schedule wrap for me with @akshaykumar for #Sajid Nadiadwala's 'Bachchan Pandey'... Time just flew and we ended up making a film in between the echoing laughter, gaming sessions and never ending lunches and dinners as we all became one family! It was surely the saddest goodbye from the beautiful Suryagarh Palace... But we shall meet again soon! Can't wait to see you guys in Cinemas!"

Bachchan Pandey is an action comedy, directed by Farhad Samji, best known for Housefull 4. The film will hit the theatres on January 26, 2022. The cast also features actors Arshad Warsi and Pankaj Tripathi.