Rashmika Mandanna has predominantly worked in the Telugu and Kannada film industry is soon going to make her Hindi debut with Sidharth Malhotra's 'Mission Majnu'.

The ‘national crush’ of India Rashmika Mandanna is all set to mark her Bollywood debut opposite Sidharth Malhotra in Mission Majnu. Recently, the actress mimicked the iconic lines by Deepika Padukone from her 2007 debut film Om Shanti Om. The ease with which Rashmika delivered the ‘Ek chutki sindoor ki kimat’ dialogue left everyone stunned. It wasn't just the fans but even Deepika herself was impressed with the actress' prowess acting skills.

The Bollywood diva took to her Instagram stories and reshared Rashmika's video and tagged her as well. Deepika also added a gif that read ‘Adoooorable’. 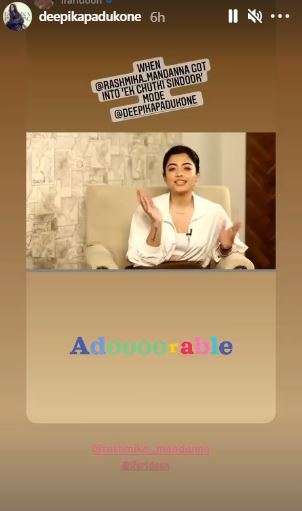 ‘Ek chutki sindoor ki kimat’ is one of the most popular dialogues of Farah Khan directorial. Earlier, Rashmika's Goodbye co-star Bollywood megastar Amitabh Bachchan also performed the dialogue in the quiz based reality show Kaun Banega Crorepati when Deepika Padukone along with Farah Khan graced the show. The veteran actor gave his own twist to the iconic lines giving a tinge of his personality.

She soon will appear in the Fahadh Faasil, Allu Arjun Telugu-starrer 'Pushpa'. She will also be seen alongside Amitabh Bachchan in Goodbye.

On the other hand, Deepika has been busy with her upcoming projects. She has an impressive line-up of projects in the pipeline including '83', 'Baiju Bawra', 'Fighter', 'Sanki', 'Pathan', and 'K', which is the Indian adaptation of Nancy Meyers's 2015 hit Hollywood film 'The Intern', and will also feature megastar Amitabh Bachchan. Deepika recently signed her second Hollywood film, a cross-cultural romantic comedy, the title of which has not been revealed yet.