The fashion diva Sonam Kapoor is ruling Cannes 2107 and, alleged boyfriend Anand Ahuja can’t seem to keep calm. Right from a pink Elie Saab dress to shimmery body-fitting golden outfit, the Neerja actress was a hit at the 70th edition of the Cannes Film Festival.

Although, Sonam and Anand haven’t made their relationship official yet, the duo has always been quite vocal about their love for each other on social media. So, when Sonam’s sister Rhea Kapoor took to her Instagram account to share Sonam Kapoor’s latest Cannes look, Anand posted an adorable comment.

As soon as Rhea posted the picture, guess whose comment followed? Well, “boyfriend” Anand Ahuja was keeping a close eye on his love, maybe that’s why he commented on the picture saying, "looveee" 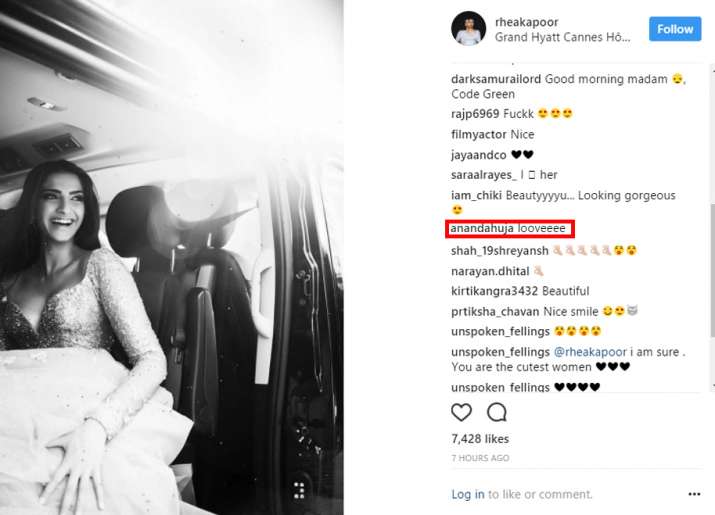 The Delhi-based fashion entrepreneur is surely in complete awe of his “ladylove” Sonam Kapoor. Well, we can’t blame it entirely because the 31-year-old actress looked like a true queen in a shimmery body-fitting golden Elie Saab outfit. The actress was looking ‘24 carat gold’ in the beautiful dress.

After Aishwarya Rai Bachchan and Deepika Padukone stunned everyone with their stylish appearances, people were keen to see what Sonam has in store for Cannes 2017. After all, she is the ultimate fashionista of Bollywood.

This year, Bollywood divas were at their best at the mega event. They have surely impressed the fashion police.