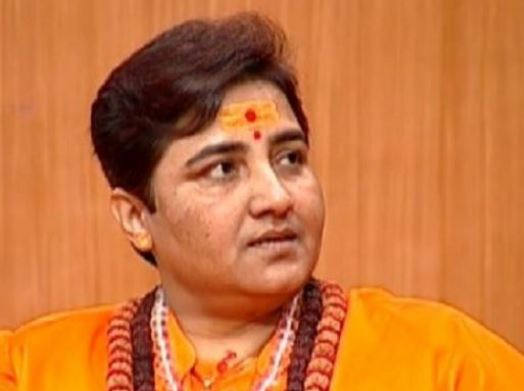 Pragya Thakur is BJP's candidate from Bhopal parliamentary constituency. She is facing-off against veteran Congress leader Digvijay Singh. Pragya Thakur's presence in election ring raised many eyebrows mostly because of her recent controversial statements about 26/11 martyr Hemant Karkare and Nathram Godse, the man who assassinated Mahatma Gandhi. Pragya Thakur was born in Bhind in Madhya Pradesh. She studied in Lahar College in Bhind. She has worked with Bajrang Dal, Durga Vahini, Akhil Bharatiya Parishad. Pragya Thakur was arrested on terror charges in connection with Malegaon bomb blasts. However, changes under MCOCA were dropped later on.

Bharatiya Janata Party (BJP) MP Pragya Singh Thakur has been admitted to the All India Institute of Medical Sciences (AIIMS), Delhi on Friday on doctors' advice.

The Member of Parliament from Bhopal is kept in a private ward and director of AIIMS, Dr Randeep Guleria is supervising her case. Her condition is said to be stable now.

She also shared a video on Twitter, in which she said the BJP government in Madhya Pradesh is making efforts to contain the spread of coronavirus by imposing lockdown in Bhopal till August 4.

BJP MP from Bhopal Sadhvi Pragya Singh Thakur has received a suspicious letter that contained a powder-like substance. The matter has been reported to police and investigation has begun.

Political rise of Pragya Singh Thakur and electoral defeats of Congress leaders Digvijaya Singh and Jyotiraditya Scindia in the Lok Sabha polls hogged headlines in Madhya Pradesh in 2019. The Congress suffered its biggest defeat in Lok Sabha polls, managing to win just one out of 29 seats in the state.

One Twitter user remarked: "Finally, someone told #PragyaSinghThakur that the plane doesn't run on communal votes -- it runs on hard-earned money, which doesn't grow with street nuisance."

SpiceJet on Sunday clarified that BJP MP Pragya Thakur was asked by the crew on Delhi-Bhopal flight to move to a non-emergency row seat as she was on a wheelchair but she refused, causing the flight to delay.

BJP MP Pragya Singh Thakur reached a police station here on Saturday night, demanding that a case be registered against a Congress MLA who had threatened to "burn" her over her remarks about Nathuram Godse.

BJP MP Pragya Singh Thakur on Saturday expressed shock over the rape and murder of a veterinary doctor in Hyderabad and demanded 'harshest punishment' to the guilty. The charred body of a 27-year-old veterinarian was found under a culvert on the outskirts of Hyderabad on Thursday. Four people have been arrested for the crime that has sparked national outrage.

What does Nitish think about Pragya episode, asks Tejashwi Yadav

The tongue-in-cheek remark by the RJD leader, who became the leader of opposition in the Bihar Assembly upon losing the deputy chief minister's post, was made in reference to Kumar's action in the wake of a prolonged controversy over money-laundering cases lodged against the younger son of Lalu Prasad.

Not just her effigy, will burn her too: Congress MLA Govardhan Dangi threatens Pragya Thakur

Pragya Thakur apologised for her statement and said that her remarks were twisted and given a different meaning. "I apologise if my remarks have hurt anyone. But my statements made in Parliament are being distorted to give them a different meaning. I respect Mahatma Gandhi's contribution to the nation," she said in the Lok Sabha.

BJP MP Pragya Thakur on Friday apologised for her praise of Nathuram Godse and said that her remarks were twisted to give them a different meaning. "It is condemnable the way my remark has been attacked without finding out the details and the context"

“Godse committed a mistake. He should have not killed patriot Gandhi ji," Surendra Singh added, using the Hindi word "bhool" for "mistake". When asked whether Godse was a patriot, the MLA did not reply.

Pragya Thakur was removed from the consultative committee of the defence ministry on Thursday, a day after she described Mahatma Gandhi's assassin Nathuram Godse as a patriot in parliament.

BJP member Pragya Thakur referred to Mahatma Gandhi's assassin Nathuram Godse as a "deshbhakt" during a debate in Lok Sabha, triggering a protest by opposition members.

The Bombay High Court on Monday sought to know from the National Investigation Agency the estimated time by which trial in the September 2008 Malegaon bomb blast case would be completed.

Not surprised at all: Owaisi on Pragya Thakur's assertion that she wasn't elected to 'clean toilets'

Pragya Thakur, a first-time BJP parliamentarian from Madhya Pradesh, recently told party workers that she "wasn't elected to get drains and toilets cleaned".

Pragya Thakur kicks up another controversy: I have not become MP to clean toilets and drains

Pragya Thakur, who is on bail in the Malegaon Blast Case was addressing a group of BJP workers. Congress said that her statement "exposes" the "hollowness" of the 'Swachh Bharat' campaign.

Rakesh Dixit, a Bhopal-based journalist, filed the petition challenging the election of Thakur on the grounds that she whipped up communal passions and indulged in corrupt practices to win the polls.