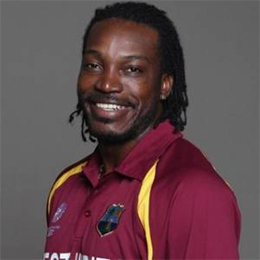 Chris Gayle does not need any introduction in world cricket he is by far the most destructive batsman in modern day cricket. The left-handed batsman only knows how to attack the bowlers it doesn't what the format is, the defensive term is not even there in his dictionary. Gayle made his international debut against India in a One Day International at Toronto where he got out on one run. The Jamaican giant has travelled almost all over the world where cricket is played. He has some astonishing stats in all three formats Test, One Day and T20. He is the only batsman to score a triple century in Test, double century in ODI and century in T20 format. He almost plays every T20 league like Indian Premier League, Big Bash, Caribbean Premier League, Afghanistan Premier League. Chris Gayle 175* in the IPL gave him the title ‘Universe Boss'.

Kohli (67) in the company of AB de Villiers (59 not out) scripted a superb run chase, sharing an 85-run stand to lay the foundation.

Gayle completed a hat-trick of half-centuries with an unbeaten 62 from 38 balls that had five fours and six sixes while Rahul helped himself to a 60 off only 27 balls.

A Gayle-storm brewed in Mohali as Kings XI Punjab's 'Universe boss' Chris Gayle went on to score his 6th ton in the IPL and his first of the season as his unbeaten century gave the hosts a win over Sunrisers Hyderabad.

Cricket fans are anxiously waiting for the action to start on the ground. Meanwhile, here are the eight players to watch out for in the forthcoming IPL 2016.