Los Angeles, Dec 16: Indian origin doctor Dr Rangasamy Ramanathan has overseen the birth of a 24-week-old baby to flower into a healthy baby in its tenth month at a neonatal intensive care unit in

Los Angeles, Dec 16: Indian origin doctor Dr Rangasamy Ramanathan has overseen the birth of a 24-week-old baby to flower into a healthy baby in its tenth month at a neonatal intensive care unit in California.

At birth, Melinda Star Guido was so tiny she could fit into the palm of her doctor's hand. Weighing just  260 grams , she is among the smallest babies ever born in the world. Most infants her size don't survive, but doctors are preparing to send her home by New Year's.

Melinda was born premature at 24 weeks over the summer and spent the early months cocooned in an incubator in a neonatal intensive care unit in California. Almost every day, her 22-year-old mother sits at her bedside and stays overnight whenever she can. 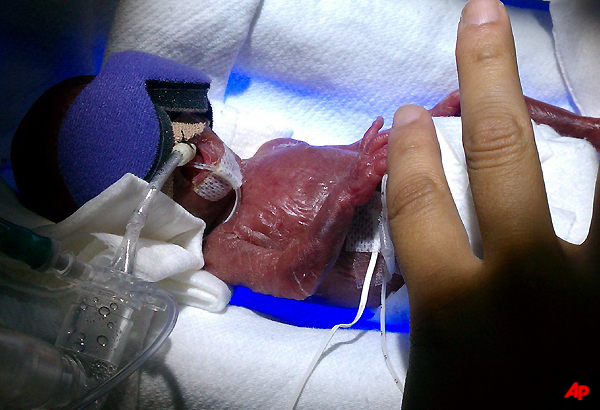 The day before her Thursday due date, Haydee Ibarra visited Los Angeles County-USC Medical Center where her daughter has been since her birth in August.

Melinda is believed to be the second smallest baby to survive in the U.S. and third in the world.

“Melinda, Melinda,” she cooed at her daughter dressed in a polka dot onesie. “You're awake today.”

During her pregnancy, Ibarra suffered from high blood pressure, which can be dangerous for both mother and fetus. She was transferred from a hospital near her home to the county's flagship hospital, which was better equipped to handle high-risk pregnancies. 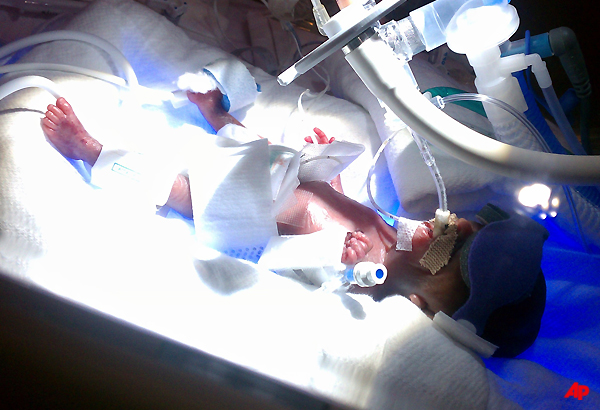 There was a problem with the placenta, the organ that nourishes the developing fetus. The fetus, however, was not getting proper nutrition, blood and oxygen. Doctors knew Melinda would weigh less than a pound, but they were surprised at how small and fragile she was.

“The first few weeks, it was touch and go. None of us thought the baby was going to make it,” said Dr. Rangasamy Ramanathan, who oversees premature infants.

Even if she survived, doctors told Ibarra and her husband Yovani Guido, children born this extremely premature can have developmental delays and impairments such as blindness, deafness or cerebral palsy.

Ibarra, who previously had a stillborn, told doctors to do whatever necessary to help her baby. 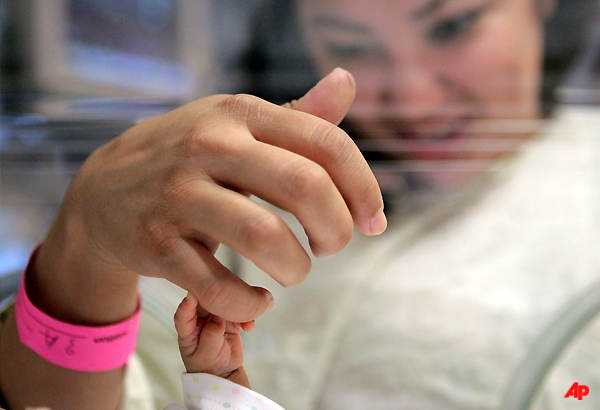 Melinda was delivered by cesarean section at 24 weeks and was immediately transferred to the NICU where a team of doctors and nurses kept watch around the clock. Infants born before 37 weeks are considered premature.

Melinda was kept insulated in an incubator and was hooked up to a machine to aid her breathing. She got nutrition through a feeding tube. Her mother said her skin felt like plastic because it was so thin.

“It takes a lot of good care and a lot of good luck. Most of them don't survive,” said pediatrician Dr. Edward Bell of the University of Iowa who keeps an online database of the world's smallest surviving babies who were less than a pound at birth. 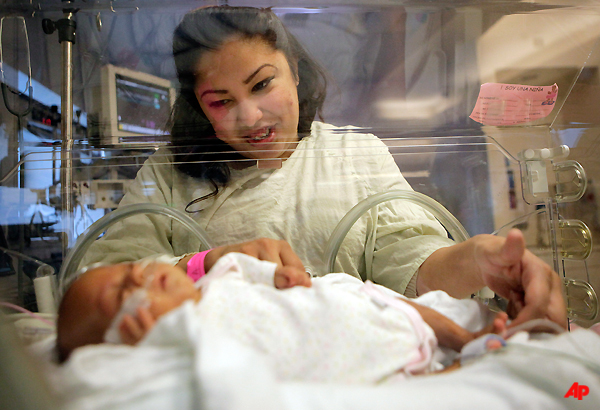 The list currently contains 126 babies dating back to 1936. Since submission is voluntary, it does not represent all survivors.

Ten babies weighing less than a pound were born last year and survived. Melinda joins three other tiny survivors delivered this year in Berkeley; Seoul, South Korea; and Iowa City, Iowa. All are bigger than Melinda, who is not eligible to be listed until she gets discharged.

Prematurity comes with high costs. Ramanathan estimates it costs $3,000 to $5,000 a day to care for a premature infant.

Most tiny babies who survive tend to be female. That's because female fetuses mature faster than males of the same gestational age. Having more developed lungs and other vital organs increases odds of survival. 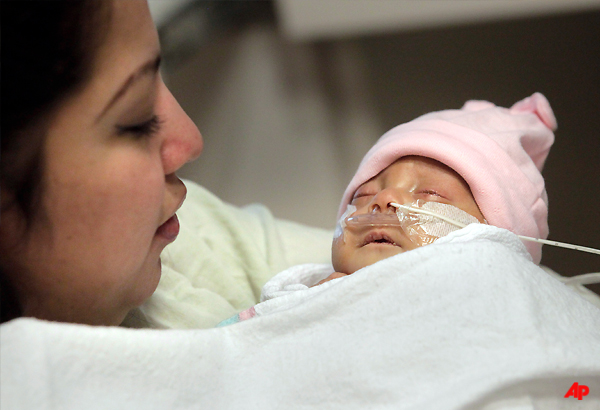 Bell published a study last year that found many survivors struggle with health and learning problems. For those for whom growth data are available, many are short and underweight for their age.

There are some success stories.

The smallest surviving baby born weighing 9.2 ounces is now a healthy 7-year-old and another who weighed 9.9 ounces at birth is an honors college student studying psychology. Their progress was detailed in a study published this week in the journal Pediatrics by doctors at Loyola University Medical Center in Illinois where the girls were born.

In the past three years, Los Angeles County-USC Medical Center treated two other babies with extremely low birth weight who survived, but Melinda holds the record at the hospital. 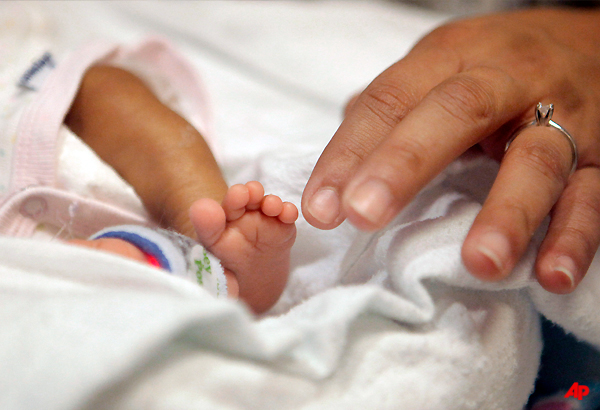 A month after she was born, she was treated for an eye disorder that's common in premature babies. She faced her biggest test last month when she underwent surgery to close an artery that usually seals after birth.

Ybarra held Melinda for the first time after the surgery. Before that, she could only touch her through the incubator. The next challenge is learning to bottle feed before discharge. Ramanathan predicted at least another two-week stay, dashing her parents' hopes of taking her home by Christmas. 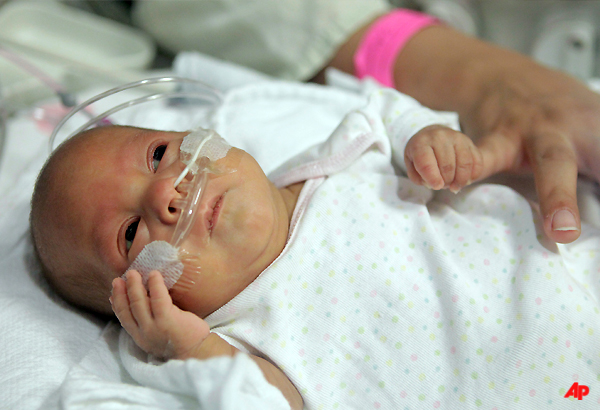 Ramanathan said it's too early to know how Melinda will fare when she grows up. Since she did not have major complications such as bleeding in the brain, he held out hope.

Melinda can breathe by herself, but still uses an oxygen tube as a precaution. On Wednesday, an ophthalmologist checked out her eyes and said everything looked good.

After the checkup, Ibarra lifted Melinda out of the incubator and sat in a rocking chair, cradling her.

Read all the Breaking News Live on indiatvnews.com and Get Latest English News & Updates from World