Delhi Air Pollution Latest News: As the AQI in Delhi entered the second-worst severe category on Tuesday, Arvind Kejriwal appealed "with folded hands" to Punjab and Haryana to take concrete steps against stubble burning to prevent the national capital from becoming a "gas chamber".

As the air quality in Delhi entered the second-worst severe category on Tuesday, Chief Minister Arvind Kejriwal appealed "with folded hands" to Punjab and Haryana to take concrete steps against stubble burning to prevent the national capital from becoming a "gas chamber".

Punjab and Haryana have recorded an increase of at least 2,400 farm fires, a major contributor to the air pollution in Delhi, till October 27, according to government data. A map released by NASA's observatory on Monday showed how stubble fires had spread across northern India, adding to the post-Diwali woes.

Kejriwal said the Delhi government is taking all steps to reduce pollution. "I appeal to the Punjab and Haryana governments with folded hands on behalf of the residents of Delhi to take strong steps and prevent Delhi from becoming a gas chamber.

"At our level, we are making all possible efforts and will continue to do so," he tweeted in Hindi.

Later, the Delhi government said in a statement that the latest NASA images show a drastic spurt in crop residue burning in the neighbouring states. The stubble plume from north-west regions has become one of the significant factors in adversely affecting Delhi's air quality.

"The effective stubble fire counts of Haryana and Punjab have increased from 1,654 to 2,577 during the past 24 hours, which is a matter of extreme concern for the residents of Delhi," it stated.

On Tuesday, the north-westerly wind direction might increase stubble plume to move towards Delhi and as per SAFAR-model, the stubble share may touch this year's peak now.

Several parts of Delhi were experiencing 'severe" air pollution on Tuesday. Anand Vihar was the most-polluted area with an AQI of 436 and Nehru Nagar following with an AQI of 430. An Air Quality Index between 401-500 falls into “severe” category and anything beyond that is “severe-plus emergency”.

The AQI takes into account five chief pollutants, including the PM10 and PM2.5. The higher the AQI value, the greater the health concern.

Delhi is going through a bad period with reference to ambient air quality after celebrating one of the cleanest Diwali in the last few years, the government said.

On Tuesday, the Delhi Fire Brigade services were pressed into action to sprinkle water where AQI levels touched alarming levels. Delhi’s air quality took a hit after Diwali night due to a combination of firecracker emissions, stubble burning and unfavourable meteorological conditions. 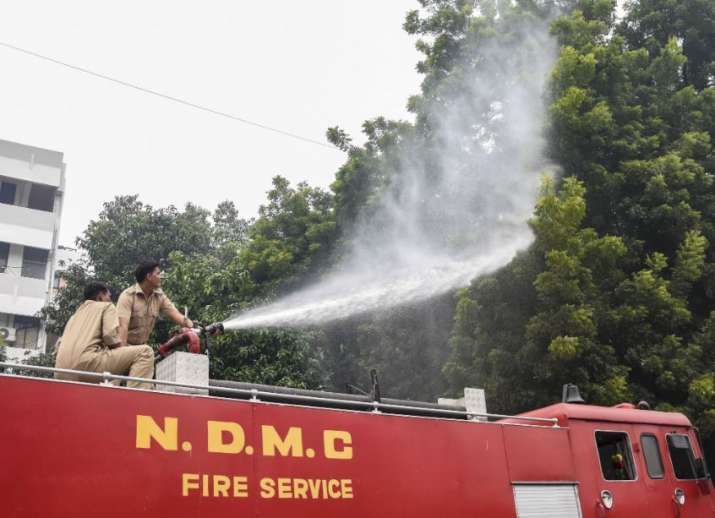 Numbers say Delhi air quality best in 4 years but is that enough?