Transactions have been suspended with 13 firms, among them IDS Tunisia and Infotech Design System, Mauritius.

The Ministry of Defence on Sunday issued a new list of firms with whom dealings have been suspended or put on hold or restricted procurements. The fresh list has excluded AgustaWestland and its parent firm Leonardo. The Defence Ministry had lifted the ban on them with conditions earlier this month.

Transactions have been suspended with 13 firms, among them IDS Tunisia and Infotech Design System, Mauritius.

There are a total of 13 firms with whom the ministry has suspended or put on hold the dealings. These firms include IDS, Mauritius; Unitech Enterprises and others," said the Ministry of Defence in an official statement.

In addition, the Defence Ministry has also debarred a total of six firms including Israel Military Industries, Corporation Defence, Russia and others, the statement said.

Rolls Royce along with its allied and subsidiary companies, and Czech firm Tatra Trucks have been put on the 'Restricted Procurement' list. 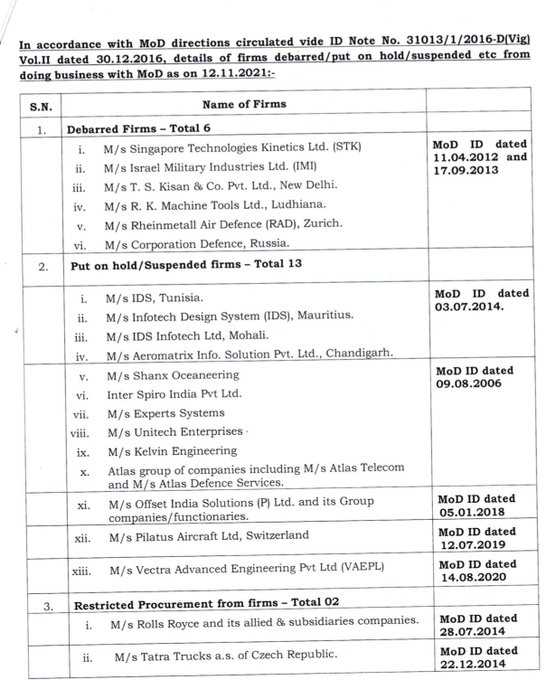 The decision to resume business with Leonardo SpA is “subject to certain conditions imposed on the company.”

Under the conditions, Leonardo SpA cannot make any commercial claims or file any civil suit against the Indian government for any previous deal.