37 years of Bhopal gas tragedy: All you need to know about world's worst industrial disaster

On the intervening night of 2–3 December 1984, India witnessed first major industrial disaster in Bhopal when tonnes of methyl isocyanate gas leaked from a factory killing thousands and affecting generations.

Bhopal gas tragedy: Thirty seven-years ago, on this day in 1984, India witnessed one of the world’s worst chemical disasters. Over 15,000 people were killed when nearly 42 tonnes of toxic gas, Methyl Iso Cyanate (MIC) leaked from the Union Carbide India Limited (UCIL) factory which was built in 1969 to produce a pesticide called Sevin in Madhya Pradesh capital Bhopal.

The cause of the so-called 'accidental leakage' is still under debate. The Madhya Pradesh government confirmed a total of 3,787 deaths related to the gas leak. A government affidavit in 2006 stated that the leak caused 558,125 injuries, including 38,478 temporary partial injuries and approximately 3,900 severely and permanently disabling injuries. Others estimate that 8,000 died within two weeks, and another 8,000 or more have since died from gas-related diseases.

While the Indian government and local activists argue that slack management and deferred maintenance created a situation where routine pipe maintenance caused a backflow of water into a MIC tank, Union Carbide Corporation (UCC) in its defence said that water entered the tank through an act of sabotage.

Civil and criminal cases were filed in the District Court of Bhopal, India, involving UCC and Warren Anderson, UCC CEO at the time of the disaster. In June 2010, seven former employees, including the former UCIL chairman, were convicted in Bhopal of causing death by negligence and sentenced to two years imprisonment and a fine of about $2,000 each, the maximum punishment allowed by Indian law. An eighth former employee was also convicted, but perished before the judgment was passed. Anderson similarly passed away on 29 September 2014. 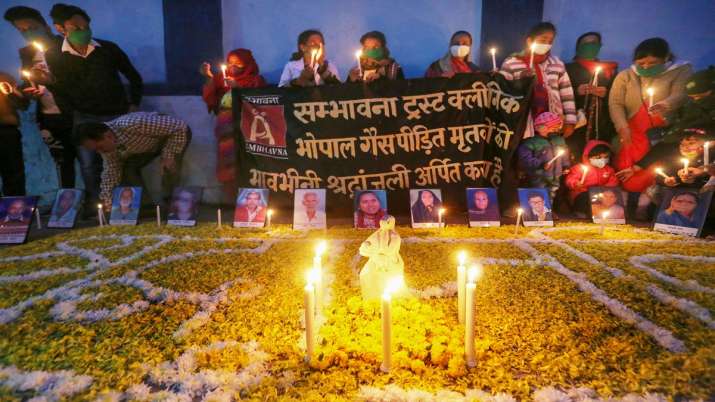 Here's the timeline of the Bhopal gas tragedy:

December 3, 1984: Toxic methyl isocyanate gas releases from Union Carbide India Ltd’s (UCIL) pesticide plant in Bhopal killing about 15,000 people and injuring at least five lakh others. Millions were left sick and the affected passed on the harmful effects of the gas to the next generations.

December 4, 1984: Warren Anderson, the chairman of Union Carbide, is among nine people arrested. But he was freed on bail of $ 2,000, upon a promise to return. Union Carbide is named as the 10th accused in a criminal case charged with culpable homicide.

February, 1985: Indian government files claim for $ 3.3 billion from Union Carbide in a US court.

1986: US District Court judge transfers all Bhopal litigation to India.

February 1989: Indian government and Union Carbide strike an out-of-court deal and compensation of $ 470 million is given by Union Carbide.

1992: Part of $ 470 million is disbursed by the government among Bhopal gas victims.

November 1999: International environment watchdog Greenpeace tests soil, groundwater and wells in and around the derelict Union Carbide factory and finds 12 volatile organic chemicals and mercury in quantities up to six million times higher than expected.

January 2002: A study by Srishti and Toxics Links finds lead and mercury in breast milk of nursing mothers in communities near the plant.

June 2002: Bhopal gas tragedy survivors launch a protest in New Delhi when they hear the Indian government plans to drop charges against Anderson.

August 2002: Charges of culpable homicide are maintained against Anderson by Indian court, which demands his extradition to stand trial. Meanwhile, a British newspaper reports that Anderson is in New York after US authorities say they are unable to locate him.

May 2003: The Indian government formally conveys its request for extradition of Anderson to the US.

June 2004: The US rejects India’s request for extradition of Anderson saying the request does not “meet requirements of certain provisions” of the bilateral extradition treaty.

July 19, 2004: Supreme Court orders the Central Bank to pay out more than 15 billion rupees, part of the original $ 470 million received as compensation kept in the account since 1992.

October 26, 2004: Supreme Court sets deadline of November 15 to pay out the rest of $ 470 million paid by Union Carbide as compensation.

June 7, 2010: All eight accused, including the then Chairman of Union Carbide Keshub Mahindra, in the Bhopal Gas disaster case convicted by a court.

Aug 2010: CBI files curative petition in SC to recall the order issued by it in Sep 1996 (SC had diluted charges against Union Carbide’s Indian officials)

May 2011: SC dismisses CBI’s curative petition for harsher charges against the Indian officials of UCIL