Earlier in Delhi, PM Modi inaugurated Delhi-Meerut Expressway and held a roadshow on the first six kilometres of the new stretch.

Prime Minister Narendra Modi on Sunday inaugurated India's first smart and green highway - the Eastern Peripheral Expressway (EPE) from Uttar Pradesh's Baghpat, where he also addressed a public rally. Earlier, the prime minister inaugurated a Phase - I of Delhi-Meerut Expressway and held a roadshow on the first six-kilometre stretch.

The Prime Minister's roadshow commenced from the Nizamuddin Bridge, the start of the about 9 km first leg of the Delhi-Meerut Expressway, and after a 6-km travel on the stretch.

NGT notice to MoEF on construction of Agra-Lucknow Expressway

First Phase Of Delhi-Meerut Expressway to be inaugurated by PM Modi on May 27: Here's all you need to know

"The Prime Minister will travel in an open jeep on Delhi Meerut Expressway for 6 km, where he will be greeted by a huge number of people. The Prime Minister would inaugurate the exhibition and 3D model there and would fly to Baghpat to dedicate to the nation the EPE," Road Transport, Highways and Shipping Minister Nitin Gadkari told media during a presser yesterday in Delhi.

Here are the highlights from PM Modi's address after the inauguration of Eastern Peripheral Expressway:

#01:45 pm: Those who worship one family cannot respect democracy: PM

#01:42 pm: Working to remove 'Congress culture' from every part of govt machinery: PM

#01:36 pm: Govt working to solve problems faced by sugarcane farmers. Now we have ensured that the value for crop procurement is directly debited in the accounts of the farmers and not sugar factory owners, so that their money do not get stuck: PM

#01:31 pm: Don't believe in rumours being spread by Congress and its allies about GST and farming: PM

#01:30 pm: UPA allies spread rumours, but they don't realise what kind of damage theirs can cause: PM

#01:26 pm: We have made Special courts for Dalits who have been facing atrocities across the country: PM

#01:23 pm: We are fortunate that we got a chance to develop five places related to Baba Saheb Ambedkar as five pilgrimages: PM

#01:23 pm: I can say from experience that selfish leaders do popular politics, but leaders who really work for people do people politics: PM

#01:22 pm: 75 per cent of loan beneficiaries of Mudra Yojna are women, more than half loans have been given to Dalits and minorities: PM

#01:20 pm: I congratulate UP and Haryana CMs for collaborating on law and order to weed out criminals: PM

#01:20 pm: You are all eyewitnesses to the achievements of the UP govt. Today, criminals come to police to surrender: PM

#01:12 pm: 100 waterways are underway, soon UP will be connected with sea. Massive ships will be able to bring goods directly to UP: PM

#01:08 pm: Have given maximum attention to rail, road and water transport because infrastructure does not differentiate on the basis caste, creed, religion and economic status: PM

#01:06 pm: Will complete the work on rets of the Delhi-Meerut Expressway with same rapid speed and throw open it to the public soon. You will be able to travel from Delhi to Meerut within 45 minutes: PM

#01:05 pm: Today when I got a chance to travel on 14-lane highway in Delhi-NCR I realised how much easier the life of people is going to be because of it. No interruptions, brand new technology and a mix of concrete and greenery: PM

#01:04 pm: Today is a crucial day for Baghpat, western UP and Delhi-NCR. Two very important projects have been inaugurated: PM

By next March, #EasternPeripheralExpressway will be completed and you will be able to travel to Delhi from Meerut only in 40 mins: Nitin Gadkari, Union Minister pic.twitter.com/VGaAL3y3fT

Here are the highlights of PM Modi's roadshow at Delhi-Meerut Expressway:

#11:05 am: PM Modi's roadshow in Delhi concludes at Akshardham temple, from where he will fly out to Kundli to inaugurate next mega highway project - Eastern Peripheral Expressway

#10:53 am: BJP spokesperson Shahnawaz debunks Congress' theory, says PM has not broken any code of conduct by doing a roadshow or in Delhi or will break any rules by addressing the public in Baghpat later in the day

#10:52 am: Congress leader Rajiv Tyagi accuses PM Modi of using the roadshow as a way of an indirect poll campaign for Kairana Lok Sabha polls tomorrow.

#10:49 pm: PM Modi's roadshow to take a U-turn from Ghazipur. He is scheduled to fly out to Bagpat to inaugurate Eastern Peripheral Expressway 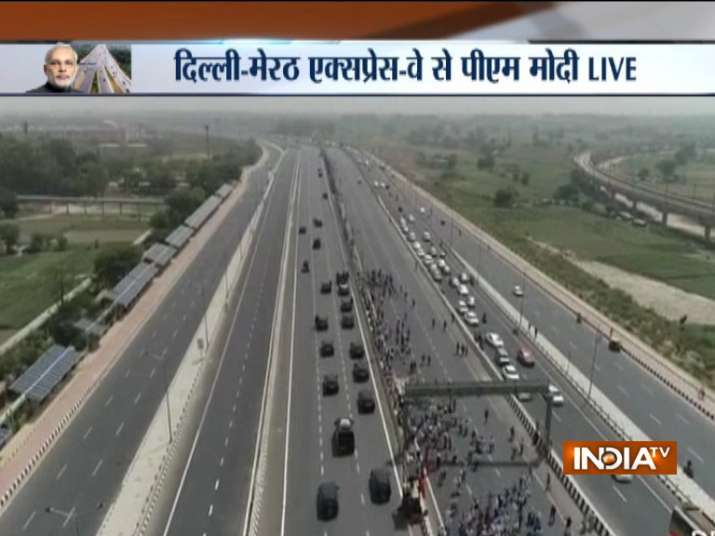 #10:00 am: PM Modi to begin his roadshow on Delhi-Meerut Expressway shortly

The 135-km Eastern Peripheral Expressway, built at a cost of Rs 11,000 crore, has several unique features and is India's first highway to be lit by solar power besides provisions of rainwater harvesting on every 500 metres on both sides and would showcase 36 national monuments and 40 fountains, the minister said, adding it has been completed in a record 500 days.

There are 8 solar power plants on this expressway having a capacity of 4000-kilowatt (4 MW).

The state-of-the-art road will have auto challans for over-speeding, as cameras will capture speed of vehicles, besides it will have provisions of tolling only for the distance travelled. The expressway has an iconic toll plaza at the entry point on Kundli side besides digital art gallery.

It is equipped with smart and intelligent highway traffic management system (HTMS) and video incident detection system (VIDS) and will set a benchmark in highway construction by being environment-friendly with world-class safety features and smart/interactive infrastructure.

The foundation stone of the greenfield project was laid by Prime Minister Narendra Modi on November 5, 2015.

According to the ministry, 2.5 lakh trees have been planted along the highway including transplant of 8-10 year old trees and drip irrigation provision has been done. 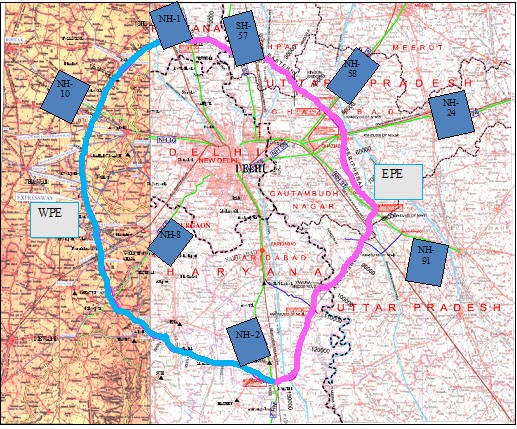 A lot of traffic, outbound or non-destined for Delhi will be diverted, adding at least 50,000 vehicles going to Jammu and Kashmir, Punjab, Haryana, Uttarakhand, Uttar Pradesh and Rajasthan will be diverted, bringing down vehicular pollution.

The fully access controlled six-lane expressway provides entry and exit designated interchanges only and has 406 structures of which 4 are major bridges, 46 minor bridges, 3 flyovers, 7 inter-changes, 221 underpasses and 8 road over bridges (ROBs).

The project had earlier faced resistance from farmers over land and other issues which have since been solved by giving higher compensation.

The Supreme Court on May 10 had directed the NHAI to throw open the Eastern Peripheral Expressway for the public by May 31, asking why were they "waiting" for its inauguration by the Prime Minister.

The apex court had said if the 135-km expressway, which envisages signal-free connectivity between Ghaziabad, Faridabad, Gautam Budh Nagar (Greater Noida) and Palwal, is not inaugurated on or before May 31, it should be thrown open for public who were facing traffic congestion in Delhi.

The Delhi-Meerut Expressway, built at a cost of Rs 841 crore, has vertical gardens with the solar system on the Yamuna Bridge.

This is the first bridge in the country/world that have vertical gardens with solar power system and drip irrigation. Beautiful lighting system has also been developed on the major structures, the minister said.


The minister said a cycle track of 2.5 metre wide has also been constructed on both the sides of this expressway, which also has the provision of 1.5 metre footpath on each side for pedestrians.

Phase-1 of the Delhi-Meerut Expressway will be inaugurated by PM @narendramodi tomorrow. This project will provide faster and safer connectivity between Delhi and Meerut. People from the NCR, Uttar Pradesh and Uttarakhand will particularly benefit from this project. pic.twitter.com/NtJtFP9Ggv

The first package of the Delhi-Meerut Expressway will provide a major relief to the commuters in Delhi-Noida and starts from Nizamuddin Bridge to UP Border having a 6 lane Expressway & 4+4 lane Highway.

The minister said that on completion of the entire expressway the time to travel from Delhi to Meerut will reduce to 45 minutes from the present about 4-5 hours.

The scheduled time period for the construction of this project was 30 months whereas the project has been completed in 17 months, he said.

(With inputs from PTI, ANI)