'Pavitra Rishta' actress Ankita Lokhande caught attention soon after her birthday celebration on December 19. She was brutally for not just having two birthday celebrations but also for inviting Ssandip Singh to her bash. This eventually caught Ankita's attention who has now shared a cryptic post on Instagram.

Ever since the death of actor Sushant Singh Rajput, every now and then we have some or the other update about his ex-girlfriend Ankita Lokhande. The 'Pavitra Rishta' actress yet again caught attention soon after her birthday celebration on December 19. A couple of pictures and videos were shared by Ankita on her social media on which fans of the late actor commented. Soon, everyone started trolling her brutally for not just having two birthday celebrations but also for inviting Ssandip Singh to her bash. This eventually caught Ankita's attention who has now shared a cryptic post on Instagram.

Taking to Instagram, Ankita shared her throughts and bashed haters and wrote, "Me and my heart, we have got issues that we battle with, but one thing that will never live inside of us is hate. When you have thoughts of hatred inside of you, that is the ugliness from the soul that creates and controls all of your issues."

Another quote by her read, "I am a stable being. If people say negative about me… I know it’s just their opinion… created based on their sanskaars… or based on their mood today. Their opinion reflects their reality, not mine. I remain stable as I know who I am." 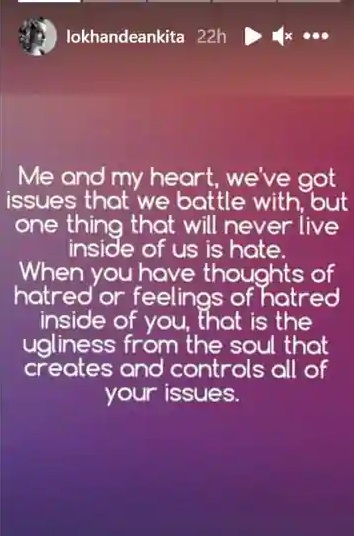 Coming back to the birthday party, it was attended by her boyfriend Vicky Jain and celebrities like-- Rashami Desai, Vikas Gupta, Aparna Dixit, etc. Ankita was seen wearing a golden bodycon dress enjoying the cake-cutting ceremony followed by a dance party.

Catch glimpses from the celebration here:

For the unversed, Sushant was found dead at his Mumbai apartment on June 14, 2020. He and Ankita started dating during the course of their show Pavitra Rishta but broke up in the year 2016.