Janhvi Kapoor and Khushi Kapoor took a stroll down the memory lane as they remembered mom Sridevi on her 57th birth anniversary.

Bollywood actress Janhvi Kapoor on Friday shared a childhood picture with mom Sridevi on her 57th birth anniversary. Sharing the picture Janhvi poured her heart and wrote in the caption, "Happy birthday Mumma. I miss you. Everything is for you, always, every day. I love you.” She also added a red heart emoji.

Janhvi's younger sister Khushi Kapoor also took to Instagram stories and shared a picture of Boney Kapoor and Sridevi, walking together. She wrote, 'Miss you everyday.' 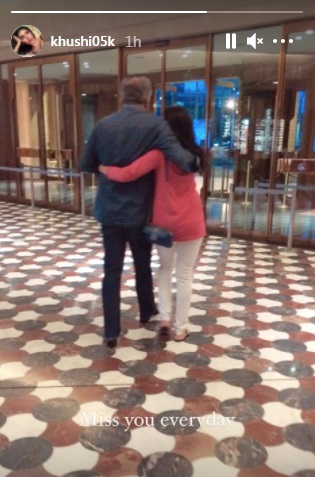 In the picture Janhvi can be seen smiling as mom Sridevi hugged her tightly. Fans and friends of Janhvi showered the post with red heart emoticons. Many celebraties including Dia Mirza, Shanaya Kapoor, Maheep Kapoor also dropped their love.

On Sridevi's third death anniversary earlier this year, Janhvi had shared a picture of a handwritten note, presumably penned by her mother. It read, "I love you my labbu. You are the best baby in the world."

Janhvi often shares pictures with Sridevi on her Instagram. Check them out here:

For the unversed, Sridevi died in 2018 after accidentally drowning in a hotel bathtub in Dubai, where she had gone to attend the wedding festivities of Mohit Marwah. Sridevi was 54.

Janhvi Kapoor made her Bollywood debut with Dhadak in 2018, after which she featured in the Netflix anthology Ghost Stories. Her upcoming movies include Dharma Productions rom-com Dostana 2. Besides this, the actress has finished the shoot for her film "Good Luck Jerry" earlier this year. Khushi Kapoor studies film in New York - she is yet to reveal her Bollywood plans.