After Sushant Singh Rajput's sudden demise on June 14, insider vs outsider in Bollywood debate has stirred a storm on the internet. While many are blaming the biggies like Karan Johar, Alia Bhatt and others for nepotism in the industry, others have been questioning why outsider are not welcomed warmly in showbiz. Actor Harshvarrdhan Kapoor reacted on the blame game and said that reacting at this time and blaming is 'just dumb'. In an Instagram post, he said that after being trolled harshly, the names being blamed might also take an extreme step.

He wrote, "It’s easy to create a soft spot for the departed and loathe the living. What if the person alive, who is the target of our hate today, was to depart tomorrow? Why create that soft spot tomorrow?" He also said, "People out here hating on and wishing death upon other people that have absolutely no connection to what’s happened ... this is your way of making this world a better place ? Sad sad regressive society is all I can say ...everyones upset ... but being reactionary and hateful isn’t the answer... that’s just dumb." 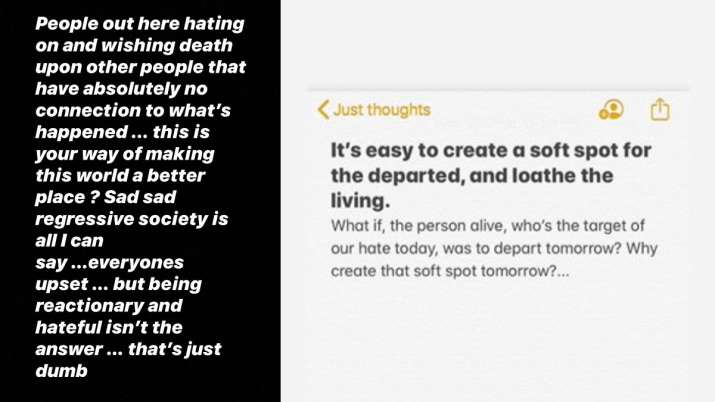 Earlier, Harshvarrdhan mourned the loss of Kedarnath actor by sharing a heartfelt post for him along with a picture. He wrote, "Woke up today to the saddest most unthinkable news ... I really loved my interactions with sushant , whenever I would see him out I would Always corner him and keep asking him things about performance, life and science , he was so bright , lived life to the absolute fullest and generous , so kind ... it’s a huge huge loss for everyone that he ever came in contact with and it fills me with deep sadness to know I will never see or be able to talk to him again"

"This is so so awful and I’m genuinely disturbed by this , I very rarely do this but after meeting him out I remember I sent him some books and films and he would watch and read and we would talk more , I have no words only sadness .. RIP sushant we all will always love you"

In another post, he wrote, "Struggling to come to terms with this one ... Kai po che, Dhoni ,Kedarnath and more you will always be an inspiration for young aspirants ,this was from a really memorable night at Huma’s.. he made us all laugh so much that night , will be difficult sleeping tonight ... RIP bro.. hope you’re smiling down on us"

Sushant Singh Rajput was found dead at his Bandra home on June 14 after he committed suicide in the morning. He was battling depression for the last six months and police found medicines and medical prescriptions in his room. His last rites were performed in Mumbai's Vile Parle Crematorium and his family immersed his ashed in Ganga on Thursday in his hometown in Patna.