Farhan Akhtar’s PDA on Instagram for Shibani Dandekar is too cute to handle, dedicates romantic poem to her

Bollywood actor and filmmaker Farhan Akhtar often takes to Instagram to pour his heart out by converting his feeling into golden words.

Bollywood actor and filmmaker Farhan Akhtar often takes to Instagram to pour his heart out by converting his feeling into golden words. Time and again the actor has shared pictures with his rumoured girlfriend Shibani Dandekar and showered her with love. This time again Farhan Akhtar has forced us to go aww with the beautiful poem that he dedicated to Shibani through his Instagram.

Farhan Akhtar shared a cozy picture with Shibani in which she is seen rapped around in the actor’s arms while both smile infectiously. Farhan also penned down a few romantic lines for his ladylove along with the mushy picture. He wrote, “Tum muskuraado zaraa……Chiraag jalaado zaraa…..andhera hataado zaraa……..roshni phailaado zaraa.” Check out the post here-

These lovebirds made their first public appearance together at the Mumbai reception of actors Ranveer Singh and Deepika Padukone. Since then both of them are busy doing PDA on social media platforms. Recently Farhan added a photo and wrote a heartwarming message for his girlfriend Shibani Dandekar on his Instagram story. In the picture, Farhan can be seen wearing a black tee whereas, Shibani is wearing a white dress. For the post, Farhan stitched his words as,'I don't know if you find love or love finds you, either way, it's a gift from the universe. So be grateful. Every. Single. Day.' 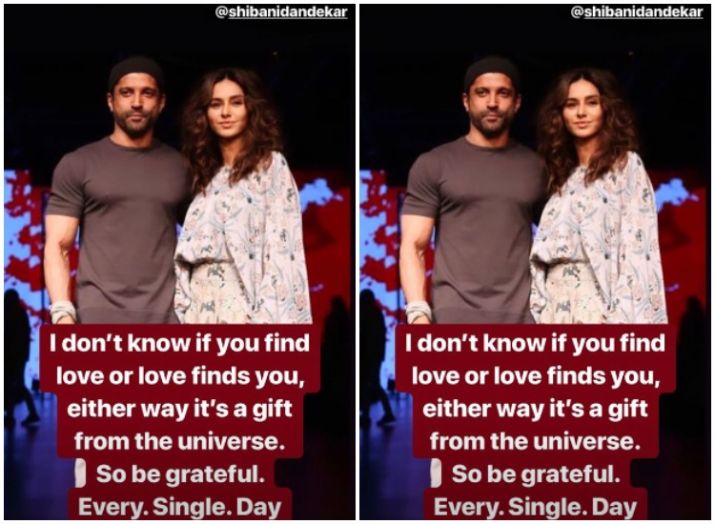 Shibani also wished Farhan by sharing a romantic picture on his birthday. Shibani shared a sizzling picture with Farhan Akhtar in which she is wearing a bikini and Farhan is shirtless. It appears that it was a 'after swim' selfie. The picture also highlights Farhan Akhtar’s little tattoo. The model captioned the adorable picture as, “Because he has the coolest tattoo in the world and because it’s his bday! Happy birthday my sweet grumps love you loads” Check out the picture here-