Late Sushant Singh Rajput's film Dil Bechara broke the record, became the highest-rated Indian film on IMDb within few minutes of its release. Directed by Mukesh Chhabra and also starring Sanjana Sanghi, the film is an official Hindi adaptation of Hollywood film The Fault In Our Stars.

Late Sushant Singh Rajput's film Dil Bechara left everyone emotional when it premiered on Disney Plus Hotstar on Friday. Directed by Mukesh Chhabra and also starring Sanjana Sanghi, the film is an official Hindi adaptation of Hollywood film The Fault In Our Stars. Within minutes of the release, Dil Bechara witnessed viewers taking over the OTT platform to watch Sushant's last film, due to which the site reportedly got crashed for some time. On the other hand, the film also broke the record as it's IMDb rating climbed to 10 within half an hour of the release. With over 21 thousand votes, the current IMDb rating of Dil Bechara stands at 9.8.

Dil Bechara shows Sushant Singh Rajput as Manny who is suffering from osteosarcoma while Sanjana Sanghi plays the role of Kizie Basu battling thyroid cancer. At present, the film is at the top position on IMDb in its 'Top Rated Indian Movies' list, defeating Kamal Haasan and R Madhavan's 2003 Tamil film Anbe Sivam. 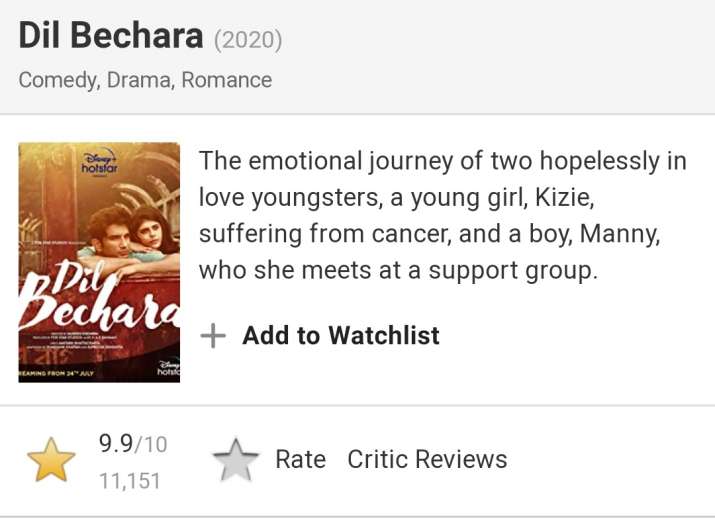 Fans were thrilled to know that Dil Bechara is the highest rated Indian film. Many called it a tribute to the late actor Sushant Singh Rajput. One Twitter user said, "That's what we call a tribute to #SushantSinghRajpoot ...His presence will be missed and remembered. ...10/10 on #IMDb..Record breaking. ...Never ever happened to any movie." Another said, "I didn't think I had the strength to watch the movie till the end. I hate watching a movie where there's a sad ending, did it only for youHeart suit

This movie broke every record, YouTube trailer, IMDB 9.9 everything~ for you. But only one problem, you're not here :')"

Check out the reactions here-

That's what we call a tribute to #SushantSinghRajpoot
His presence will be missed and remembered.
10/10 on #IMDb
Record breaking.
Never ever happened to any movie. #DilBechara pic.twitter.com/BlbwKKziC5

The first movie I never seen before with top IMDb rating..all because of you #SushantSinghRajpoot sir. You people deserve it Sushant sir as well as @sanjanasanghi96 (kizie) ma'am. Such a fentastic performance. Hats off to you both. #DilBechara #IMDb

Each dialogue of #SSR is making this movie biggest hit of India.

Earlier, soon after the trailer of Dil Bechara rolled out, it smashed all records. It garnered 70 million views within a short period of time. Not only this it even surpassed the record of most popular superhero films Avengers: Endgame and Infinity War by receiving 4 million 'likes' in just eight hours. Later, it became the first film trailer on YouTube to get more than 10 million likes. If this was not enough, the trailer of Dil Bechara has also beaten the song Despacito's record, by Luis Fonsi featuring Daddy Yankee, which has over 38 million likes.