New Delhi: The evergreen Bollywood beauty Rekha's look in Abhishek Kapoor's ‘Fitoor' is out and you cant decide to what to look at- Rekha or Kashmir ?‘Fitoor' which is based on Charles Dickens' novel ‘Great

New Delhi: The evergreen Bollywood beauty Rekha's look in Abhishek Kapoor's ‘Fitoor' is out and you cant decide to what to look at- Rekha or Kashmir ?

‘Fitoor' which is based on Charles Dickens' novel ‘Great Expectations' is being shot in Kashmir. Rekha who is playing a wealthy and beautiful begum was clicked on the sets of the film and the pictures were uploaded on social media yesterday.

Rekha is considered as one of the most beautiful and finest actresses of Bollywood. She recently celebrated her 60th birthday but age just seems to be a number and doesn't look like affecting her fan following in the country.

The director of the film Abhishek Kapoor tweeted yesterday “Had the privilege of shooting 2 timeless beauties in 1 frame. #fitoor #rekha #kashmir”.

One of the most popular novels of Charles Dickens, ‘Great Expectations' is about a wealthy spinster Miss Havisham. The novel that is set in 19th century London is adapted into a modern day Kashmir for the film.

The film stars Aditya Roy Kapur and Katrina Kaif in leading roles in the film. Aditya Roy will be playing a young boy named Firdaus who falls in love with adopted daughter of begum Noor.

The begum becomes the biggest obstacle in their love life. The character of Noor is being portrayed by Katrina Kaif. 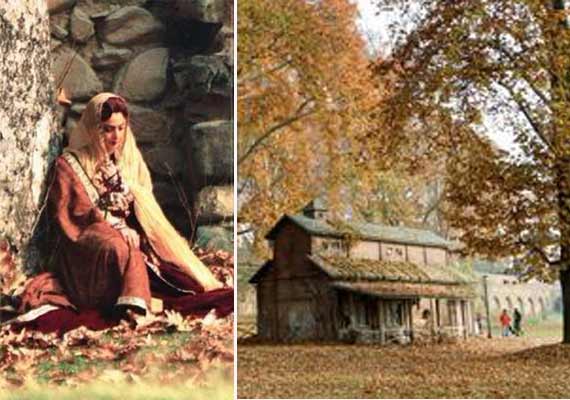 The role of the younger begum will be played by Aditi Rao Hydari. ‘Fitoor' also stars Ajay Devgn in supporting role.

Rekha was last seen in Indra Kumar's ‘Super Nani' which failed to impress the critics and was a huge failure at the box office too. Though Rekha's acting was the only thing in the film that had any strength.

Considering her busy shooting schedule for the film, Rekha was unable to attend Salman's siter Arpita's wedding however, the veteran actress is considered very close to Salman.

‘Fitoor' is produced by Aditya's brother Siddharth Roy Kapur and is expected to release on Christmas next year.