Voting took place for Delhi Assembly Elections 2020 on Saturday (February 8). All eyes are now on results. Though actual results will only come on February 11, India TV Poll of exit Polls has suggested that Arvind Kejriwal-led Aam Aadmi Party (AAP) will be able to retain its hold on power in Delhi.

Voting took place for Delhi Assembly Elections 2020 on Saturday (February 8). All eyes are now on results. Though actual results will only come on February 11, India TV Poll of exit Polls has suggested that Arvind Kejriwal-led Aam Aadmi Party (AAP) will be able to retain its hold on power in Delhi.

The Poll of Exit Polls gives you a sneak peek into the mood of Delhi voters. However, we make it clear that exit polls are not the actual results and in case of a close contest, the numbers may swing massively considering the margin of error.  Stay with Indiatvnews.com for comprehensive coverage of Delhi Assembly Elections 2020.

70-member Delhi Legislative Assembly has its halfway mark at 35 and AAP seems to be crossing this with ease. The most conservative estimate of AAP's tally puts it at 47 (Times Now-IPSOS) which is a comfortable number for the party. At its very best, AAP seems poised to not only repeat but improve on its performance in 2015 elections. ABP News-CVoter and India Today-Axis My India Exit Polls have quoted this number at 69 and 68 respectively. However, these exit polls have specified a range. 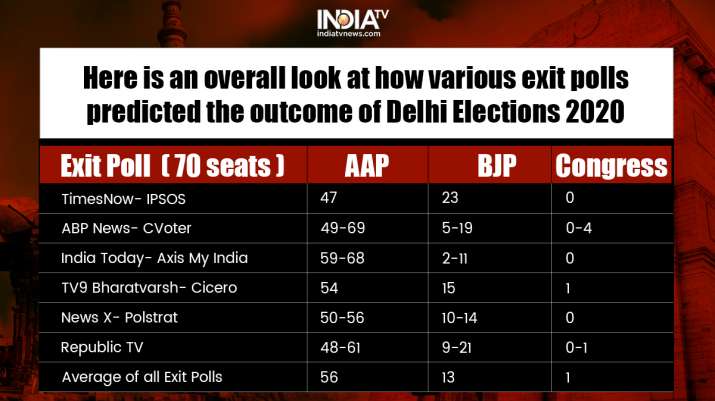 Things look upbeat for BJP when their probable tally is compared to its performance in 2015 elections. BJP was able to bag just 3 seats at the time but now it may improve on its performance. Although the most conservative estimate puts BJP at 2 (India Today-Axis My India) there is also a projection where BJP bags 21 seats (Republic TV Exit Poll).

Congress seems to be continuing its dismal run in Delhi Assembly Elections. Congress has been in power in Delhi but now it seems to be fighting just to be relevant in politics of the national capital. In 2015 Delhi elections, Congress had drawn a blank.

This time, the most optimistic projection puts Congress tally at 4 seats (ABP News-CVoter). TV9 Bharatvarsh- Cicero and Republic TV exit polls predict that Congress will just be able to open its account and win 1 seat. While Times Now-IPSOS, India Today-Axis My India and News X-Polstrat Exit Polls have predicted that Congress will not be able to win even a single seat.

So taking a rough average of the exit polls, AAP seems poised to win 56 seats while BJP and Congress will end up with 13 and 1 seat respectively.

8:22 pm: Here is an overall look at how various exit polls predicted the outcome of Delhi Elections 2020

8:12 pm: If we consider all exit polls and take an average, following is how the parties may stand after results are out.

7:26 pm: Here's the breakup of Vidhan Sabha seats according to which Lok Sabha constituency they fall under (ABP News-Cvoter)

6:48 pm: ABP-Cvoter exit poll predicts that AAP may win 7-9 Vidhan Sabha seats out of 10 that fall under Chandni Chowk Parliamentary (Lok Sabha) constituency. The survey gives 1-3 seats to BJP and 0-1 to Congress.

6:44 pm: Republic Channel has predicted tha Arvind Kejriwal-led AAP will form the government with 48-61 seats, the BJP may bag 9-21 seats, and Congress may be a distant third at 0-1 seat

6:32 pm: West Delhi: AAP mat get 9, BJP may get 1, while Congress may draw a blank. India Today-My Axis Exit Poll has predicted this.

6:30 pm: First exit poll says that AAP may get 44 seats while BJP may get 26 seats. This is a prediction by Times Now-IPSOS

What are Exit polls?


Exit polls are conducted immediately after the voters have cast their ballot at the booth, in contrast to opinion polls which are done in the lead-up to the voting. Exit polls aim to find out how a sample of voters have actually voted, as they strive to give a clearer picture of the outcome.

Different organisations employ different methodologies to interview the voters, with their respective sample sizes varying as per requirements.

(Disclaimer: The results of exit polls can’t be taken as a final outcome. Official result declared by Election Commission of India on February 11 will give absolute clarity.)

This is a high stakes election for all players, Aam Aadmi Party (AAP), Bharatiya Janata Party (BJP) and Congress. Delhi Chief Minister Arvind Kejriwal-led AAP seems to have started on the right foot as it commands 67 out of 70 of the current Delhi Legislative Assembly due to be dissolved. BJP is yearning to make a dent in AAP's strongholds across the city while Congress is fighting to be a relavant force. In 2015 Delhi Legislative Assembly elections, AAP captured 67 of the 70 seats while BJP bagged 3. Congress drew a blank and it was the most embarrssing result for the party that has been in power in Delhi under late Shiela Dikshit.

India TV will deliver comprehensive coverage of the exit poll results slated to be carried out by major agencies and news organisations. The “Poll of Exit Polls” is the average of results of other polls, which could give an insight into the voting patterns of Delhi’s electorate.

You can watch India TV Poll of Exit Polls LIVE

Voting is underway at 13,750 polling booths across 70 assembly constituencies in Delhi.

The police have deployed around 40,000 security personnel, 19,000 home guards and 190 companies of Central Armed Police Forces to ensure smooth conduct of the polls. Security personnel are guarding the strong rooms in which EVMs. will be stored. Election staff carried EVMs and other polling material to booths under tight supervision in all constituencies.