The festive season might be here but the auto sector is still reeling under the prolonged slowdown which has impacted the production figures for even the biggest of carmakers in the Indian market.

Maruti Suzuki, India's biggest car manufacturer cut its production by 17.48 per cent in September making it the eighth straight month where the output has been cut.

Production of utility vehicles such as Vitara Berezza, Ertiga and S-Cross declined by 17.05 per cent. 18,435 units of these cars were produced in September 2019 as compared to 22,226 units in September 2018.

Earlier in August, MSI had cut its overall production by an unprecedented 33.99 per cent at 1,11,370 units.

Here are the sales figures for the month of September 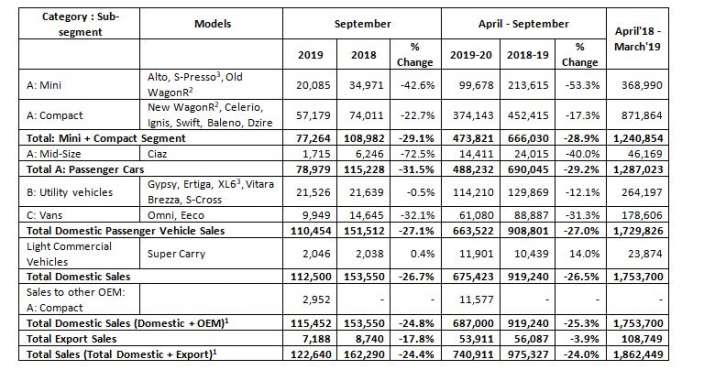 As figures above show, the highest impact of the auto sector slowdown has been on the passenger cars whose sales between 2018 and 2019 have dropped by 31.5 per cent. Maruti Suzuki Ciaz has contributed maximum to that downturn with its sales going down by a whopping 72.5 per cent.

Light commercial vehicle Super Carry is the only vehicle by MSI to see a slight upwards trend in sales (0.4%).

Attempts have been made to ensure upwards trends in these figures by MSI. Price cuts and buyers benefits have been announced on a number of cars in the fleet. However, no significant impact has been seen so far on the sales figures.

This is the story across India's auto market. Tata Motors, Mahindra & Mahindra, Hyundai, Toyota, Honda have all reported a massive dip in sales and production of their most popular cars in India.

Whether festive season comes to the rescue of these car companies, only time will tell.