Infinix Hot 9 packs a 5,000mAh battery, quad rear cameras and more. Read on to know whether or not is worth going for

Infinix is one of the smartphone makers that provide users with affordable smartphones with specifications and features than can’t be deemed cheap. The Hong Kong-based company has a number of such smartphones in the country and adding on to its smartphone portfolio, Infinix has recently introduced the new Hot 9 and Hot 9 Pro smartphones in its Hot series.

The Infinix Hot 9 series comes with a couple of highlights such as the cameras, the display, and more. I got a chance to spend some time with the Infinix Hot 9, which is the younger sibling out of the two and here is what I think of it. Read on to know whether or not the Infinix Hot 9 is a worthy device to go for in the affordable price segment.

The Infinix Hot 9 follows the design template that is common these days; it has a punch-hole display and a vertically-aligned rear camera module. What makes it slightly different from most smartphones is the colour choices we get. There are two colour options: Ocean Wave and Violet, out of which I got the latter colour variant to use. The colour options appear different but aren’t cringe-worthy. Although, they might be flashy for people who are more into basics. The device features a gem-cut texture design at the back, which appears quite decent. Another thing good about the smartphone is that it doesn’t appear cheap, although it is made up of plastic. 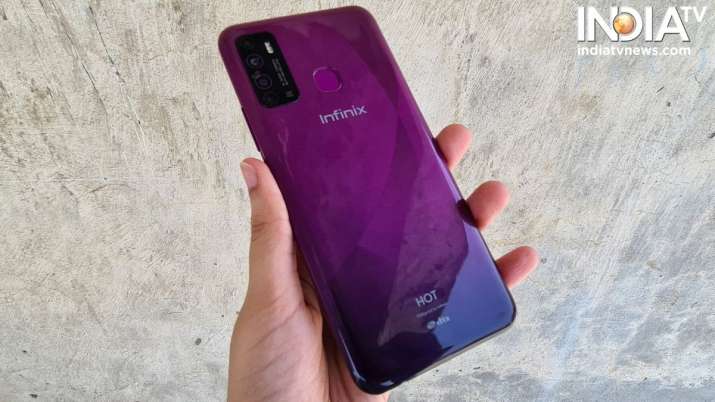 Aesthetics-wise, the smartphone has a vertical camera setup at the back with four cameras and an LED flash. The cameras are placed in the top left corner. There is also a fingerprint scanner at the back, under which there is the ‘Infinix’ branding. This followed by the Hot series and the DTS branding at the bottom. Upfront, there are fewer bezels due to a punch-hole in the top left corner. The right side of the device is home to the volume rocker and power on/off button while the left side has the SIM tray. The top has nothing and the bottom has the speaker grille, a micro-USB port, and a 3.5mm audio jack. 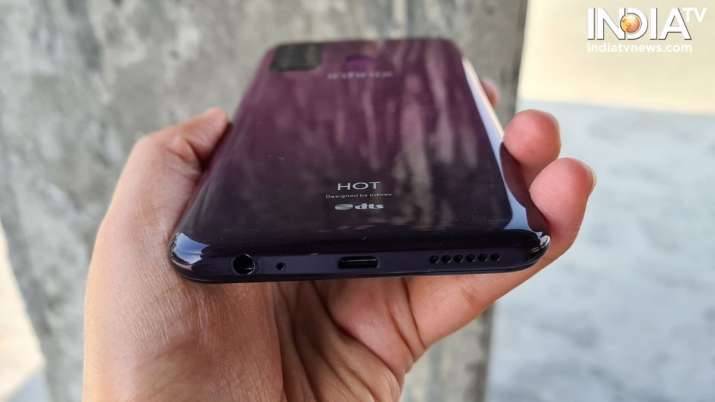 While the Infinix Hot 9 isn’t a smartphone that brings forward newness, the decent built quality coupled with the lightweight makes for a decent option in the budget segment. 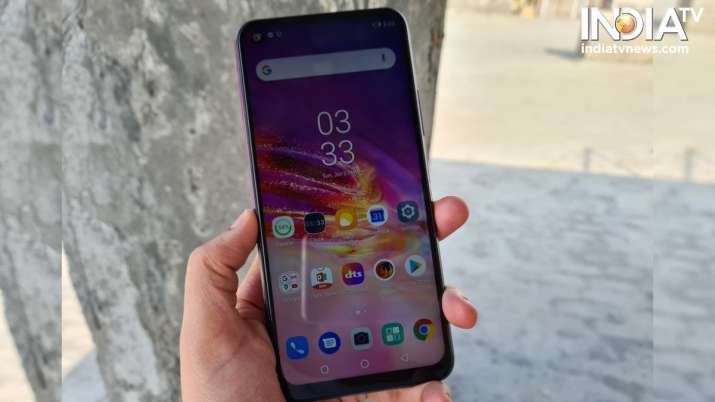 The Infinix Hot 9 comes with a punch-hole display, which is new for the company. The punch-hole is situated in the top left corner of the screen and makes way for lesser bezels. However, the chin has visible bezels. The display spans 6.6-inch and comes with an HD+ screen resolution. It comes with display settings such as Adaptive Brightness, Eye Care, Dark theme, and the Inadvertently mode to avoid accidental touches. 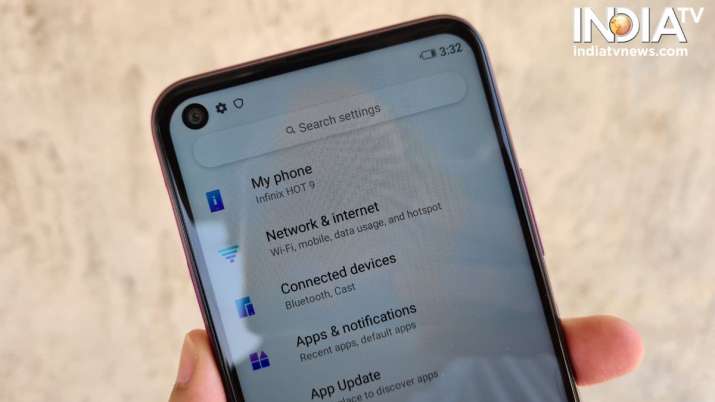 The Infinix Hot 9 display is a decent one with decent brightness levels and viewing angles. Using it and viewing videos was above average due to its vibrant colours. However, the display doesn’t capture a lot of details and the experience is just average. Additionally, the punch-hole isn’t as subtle as it should be; it appears quite big on the screen and acts as a hindrance while using the smartphone. Among others, sunlight visibility was decent.

The Hot 9 offers quad-camera rear cameras rated at 13MP, 2MP, 2MP with a low-light sensor. There is an 8MP single camera sensor, which is an in-display one. The smartphone supports various camera features such as AI capabilities, Bokeh effect, Night mode, Macro mode, and more. 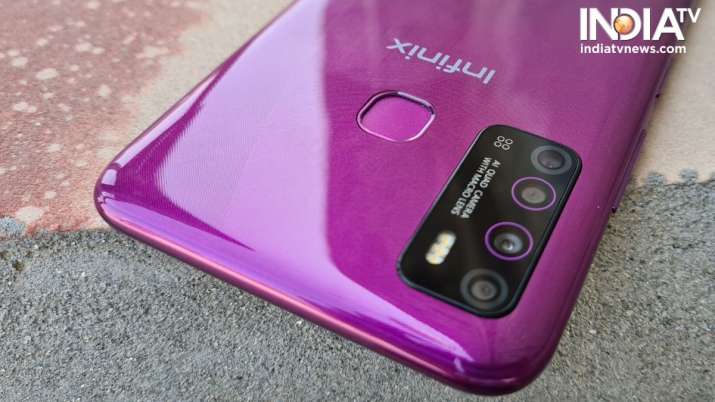 Speaking of the rear cameras, the Infinix Hot 9 did a good job and surprised me with the resultant pictures. The images had details and the colour production seemed balanced. I tried the smartphone in most of the conditions I could test it in and the device did not disappoint me much. The HDR mode worked fine with various areas of the images being highlighted decently. However, the portrait mode and the night mode didn’t perform up to the mark. While the bokeh effect was created, the depth effect appeared processed. As for the night mode, low-light images were all about grainy and blurred images.

The front camera did a decent job too; it produced some decent selfies, that are social media-worthy. However, the front camera doesn’t endorse natural colour production and you will find a processed version of yourself in the selfies taken. The good aspect is that the images aren’t beautified a lot. Among other things, the device supports AR filters for you to add filters while clicking the images, which is a good addition. However, since Snapchat is mostly used by people for such filters, I am not sure how well the feature will be received.

The Infinix Hot 9 is powered by a MediaTek Helio P22 processor and comes with 4GB of RAM and 64GB of internal storage option. The smartphone is a decent performer when it comes to going about the usual tasks such as streaming videos, scrolling through our social media accounts and not missing out on the world, taking pictures, or playing games. The smartphone was able to run decently with a number of apps in the background. While more often than not the usage was good, the smartphone did stutter at times and this could become a problem in the long run. 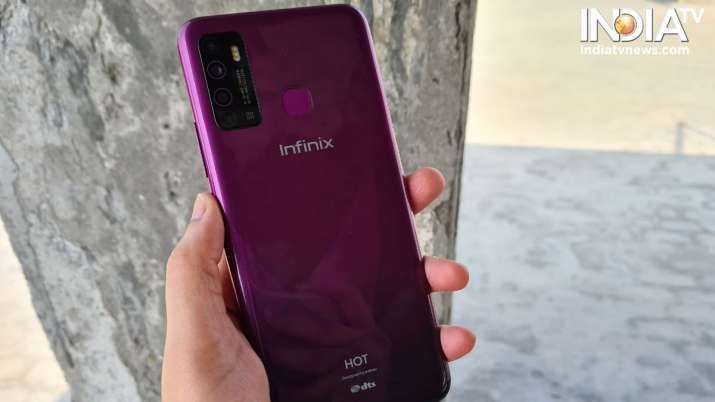 As for the 5,000mAh battery that provides the Hot 9 its fuel to carry tasks, it performed above average. The smartphone, on a single charge, was able to last me more than 3 days on standby and more a day while being used. The battery is one of the highlights of the device. The Hot 9 runs XOS 6.0 based on Android 10. The UI is one of the downsides of the device. It feels cluttered and comes with bloatware you can’t ignore. However, it has a feature for you to try out games before downloading them and this can attract many out there.

Among others, the rear-mounted fingerprint scanner was snappy was able to unlock the device in less than a second and the audio quality was decent too and the presence of a 3.5mm audio jack is useful. Although, it would have been appreciated if the smartphone supported fast charging and USB Type-C port, much like various other smartphones in the arena.

The Infinix Hot 9 is a part of the smartphone category that attracts a majority of users in India. At a price of Rs. 8,499, the smartphone attempts to bring decent cameras, a good battery, lightweight design, and much more. However, the UI can put off a lot of users and downgrades the user experience to a certain extent. It competes against the likes of the Realme Narzo 10A with a better Helio G70 processor, better Realme UI and fast charging, and the Motorola Moto G8 Power Lite with an improved Helio P35 SoC.

That said, the Infinix Hot 9 is competitive enough and tends to offer a lot of stuff on our plates. If the UI isn’t an issue for you, you can definitely go for it.