Before heading to 'Maniac Monday', we take a look back at some of the top moments from week 1 at the Wimbledon

Missing its first appearance since the Second World War, the return of the Wimbledon Championships wasn't all 'strawberry and cream' with rain affecting the opening day at the All England Club. Yet the last seven days produced enough enthralling action and moments of heartbreak, before taking the usual mid-Sunday off for one last time with Wimbledon looking to add mid-fortnight action on Sunday from the following year. Before heading to 'Maniac Monday', we take a look back at some of the top moments from week 1 at the Wimbledon.

“I seem to be having a really nice connection with the grass,” joked Novak Djokovic when asked about his connection with the Centre Court crowd. "I don't recall falling this much in the first two matches of Wimbledon," he added after his second-round win over Kevin Anderson, during which he fell at least five times. The comment came 24 hours after Serena Williams pulled out of her first-round tie after suffering a brutal fall, thus putting a heartbreaking end to her bid to a 24th Grand Slam title. On the same evening, Roger Federer's opponent from first-round had retired injured after slipping on Centre Court. On day 3, there were a lot many additions to the list - Andy Murray, Bianca Andreescu, Sloane Stephens, Nick Kyrgios, John Isner and a ball kid. After her fourth-round exit in last month's French Open, the return of Wimbledon seemed to be perfect for Serena to ignite her determination to grab the record-equalling feat of 24 majors. She last lifted a Grand Slam trophy in 2017, before taking maternity leave. She then reached four Grand Slam finals, two of which were at the Wimbledon - 2018 and 2019 - but failed to add an eighth Championship trophy to her cabinet, falling to Angelique Kerber and Simona Halep respectively. But the veteran's bid to the elusive feat ended with her “heartbroken” and in tears. She had injured her right leg when she slipped behind the baseline, just thirty minutes into the first-round match against 100th-ranked Aliaksandra Sasnovich of Belarus.

“I was heartbroken to have to withdraw today,” Williams said in a statement earlier this week. “Feeling the extraordinary warmth and support of the crowd today when I walked on — and off — the court, meant the world to me.” 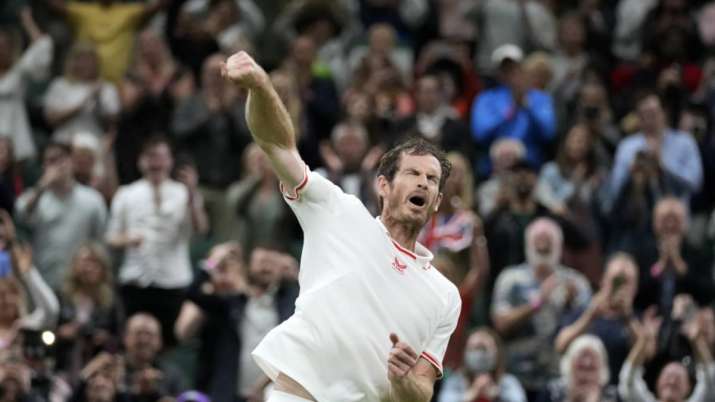 After a gap of four years, Andy Murray, a two-time champion, returned to the beloved SW19, and returned to action after a three-month absence owing to a groin injury that only added to his latest series of injuries. The most serious one of course was the double hip replacement surgery which was the reason behind his Wimbledon absence since 2017. A standing ovation welcomed Britain's only male champion at Wimbledon in 85 years and he did not disappoint the crowd. He defeated 24th-seeded Nikoloz Basilashvili in a four-set tie in his opener before edging Oscar Otte in a five-set thriller. However, he eventually lost in straight sets to Denis Shapovalov, a 22-year-old left-hander from Canada.

Although pleased to make it through three rounds with an injury complaint, Murray bid adieu to Wimbledon with a glum question.

“There is a part of me that feels a bit like I have put in so much work the last three months and, ultimately, didn’t play how I would want and expect. And it's like: Is it worth it?” Murray said. “Is all of that training and everything that you’re doing in the gym — unless you’re able to, like, practice and improve your game and get matches and continue (to) get a run of tournaments — is it worth all of the work that you’re doing?”

Like Murray, Federer too has been returning from a surgery - both on his knight knee in 2020 - and heading into Wimbledon he played just eight games. Four of those were in French Open last month where he had reached the last 16 before pulling out in a bid to focus on longevity, but more so with Wimbledon in focus which is his last Grand Slam appearance before he turns 40. But the 20-time major winner looked in no discomfort after his 6-4, 6-4, 5-7, 6-4 victory over Britain's Cameron Norrie on Saturday.

Come Monday, Federer will play the fourth round at a Grand Slam for a record-extending 69th time, where he will take on No. 23 seed Lorenzo Sonego.

“I definitely feel like I’ve gotten my rhythm now, at this point,” Federer said after the game.

Last May, at the Roland Garros, there were four first-time Grand Slam semifinalists bidding for a maiden final appearance before a champion was declared who was ranked outside the top 10. And the story looked somewhat similar in Wimbledon as well. Serena, Bianca Andreescu Belina Bencic and Petra Kvitova exited in the opening round, Elina Svitolina and Sofia Kenin in the second round, and 11th-seeded Garbine Muguruza in the third round. This leaves only four of the top 12 seeds alive in women's singles with Ash Barty being the top-seeded. Meanwhile, Iga Swiatek, who is playing a Wimbledon main draw for the first time in her career, and Aryna Sabalenka, who made it to the third round previously, are still alive hinting towards a Roland Garros-esque story. Russians on the charge

After the Italians made history in French Open, the Russians scripted one for themselves at the SW19. For the first time in Open Era, three Russian men have reached the second week in Wimbledon. Recovering from two-set down for the first time in his career, Daniil Medvedev defeated former Wimbledon finalist Marin Cilic 6-7 (3), 3-6, 6-3, 6-3, 6-2 on Saturday, and hence joined Andrey Rublev and Karen Khachanov in the fourth round.