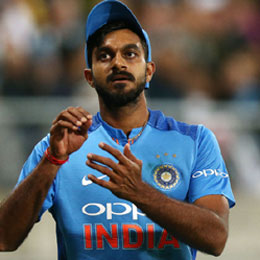 The middle-order batsman with the ability of power hitting and who can also bowl some handy overs is always a crucial player for any team and Shankar is one of them. He made his debut in Nidahas Twenty20 Tri-Series against Sri Lanka on March 6, 2018. He was under a lot of scanners after his poor outing in Nidahas Trophy final against Bangladesh but he made an excellent comeback in ODI series against Australia at their soil in 2019 where he was called as a replacement for Hardik Pandya. He continued his good run in New Zealand limited-over tour. Shankar is a good prospect for Indian cricket team's future.

Out of form Shikhar Dhawan to play for India A, injured Vijay Shankar ruled out