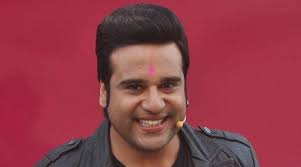 Krushna Abhishek, also known as Krishna Abhishek, is best-known for TV shows like Comedy Circus, Comedy Nights Bachao and The Drama Company. He has also featured in films like Bol Bachchan and Entertainment. He has also starred in several Bhojpuri films. He married Kashmera Shah in 2013.

Bigg Boss 14: Even though Kashmera Shah has been happily married to comedian Krushna Abhishek for years now, we can imagine him feeling slightly jealous right now. Will he react to this revelation?

Soon after, Govinda released a statement clearing his stand about being accused of not coming to meet Krushna Abhishek's twins in the hospital when they were sick, Kashmera Shah shared a cryptic post on Instagram on a mother's love and protecting the family. On the other hand, Govinda's niece Arti Singh also shared an old photo and said, "apne toh apne hote hain."

Govinda on nephew Krushna's statement, says he is 'washing dirty linen in public'

Govinda spoke about the controversy with nephew Krushna Abhishek. This is in regards to his disappearance from The Kapil Sharma Show when Govinda appeared as a guest.

Breaking his silence on not doing The Kapil Sharma Show with his uncle Govinda, actor and comedian Krushna Abhishek opens about the rift between his family and that of his uncle Govinda in an interview.

The Devgn thriller, incidentally, was influenced by the 1996 Hollywood hit, Primal Fear, starring Richard Gere and Edward Norton. Krushna's character suffers from split personality in the film that, he promised, would keep the audience on the edge of their seats.

The Kapil Sharma Show: Krushna Abhishek walks off the stage for THIS reason

The Kapil Sharma Show: Recently when Remo D'Souza and his gang including Dharmesh Yelande, Punit Pathak and Salman Yusuff Khan came on stage, something happened that forced Sapna aka Krushna to leave the stage. For those who got worried about whether he is leaving the show or not, the answer is a big NO. Everything that took place was a mere joke that left not just the audience but also the guests' ROFLing.

The Kapil Sharma Show: Krushna Abhishek once said NO to play the role of Sapna. Know why

The Kapil Sharma Show is known for various celebrities spilling the beans about various incidents in their life. And now the latest revelation has come about Krushna Abhishek who is seen playing the role of Sapna Lal Nalasoparia. Did you know the comedian was apprehensive at first for playing the role of a woman and also rejected the show?

Krushna Abhishek on Bharti Singh: Our camaraderie is on a different level

Actor-comedian Krushna Abhishek has joined hands with comedian Bharti Singh once again. He says their camaraderie is on a different level.

In the video, Arti Singh can be seen dancing to the tunes of Govinda's song along with her brother Krushna Abhishek and sister-in-law Kashmeera Shah.

The comedian shared a throwback picture in which the little Krushna is seen sitting next to Farah.

The Kapil Sharma Show celebrated the completion of its 100 episodes with the team of Good Newwz.

The upcoming episodes of the popular 'The Kapil Sharma Show' will see Salman Khan, who also happens to be the producer of the show, LOLing at Kapil's jokes.

Bigg Boss 13 which is going to be hosted by Salman Khan might have Govinda's niece and Krushna Abhishek's sister Aarti Singh participating this time.

Kapil Sharma, the famous comedian is all set to welcome Jr. Kapil with wife Ginni Chatrath in December, reveals his co-star Krushna Abhishek.

Krushna had earlier been a fierce competitor to Kapil, but teamed up with him after Grover's departure from the show.

Krushna Abhishek expressed his wish to help the families of the martyrs who lost their life in Pulwama. He plans to visit Dehradun, where late Major Vibhuti’s family resides.

Krushna Abhishek and Kashmera Shah revealed that having kids changed their life to another level.