Heavy security arrangements have been in place as US President Donald Trump comes on his first state visit to India. Trump landed at the Sardar Vallabhbhai International Airport in Ahmedabad on Monday along with wife Melania Trump, daughter Ivanka and a delegation of high-profile US government officials. Trump will arrive in Delhi after visiting Taj Mahal with his wife on Monday evening.

Heavy security arrangements have been in place as US President Donald Trump comes on his first state visit to India. Trump landed at the Sardar Vallabhbhai International Airport in Ahmedabad on Monday along with wife Melania Trump, daughter Ivanka and a delegation of high-profile US government officials. Trump will arrive in Delhi after visiting Taj Mahal with his wife on Monday evening.

Trump will be accorded a traditional Indian welcome with a rangoli-made from flowers and other biodegradable materials, according to news agency IANS. 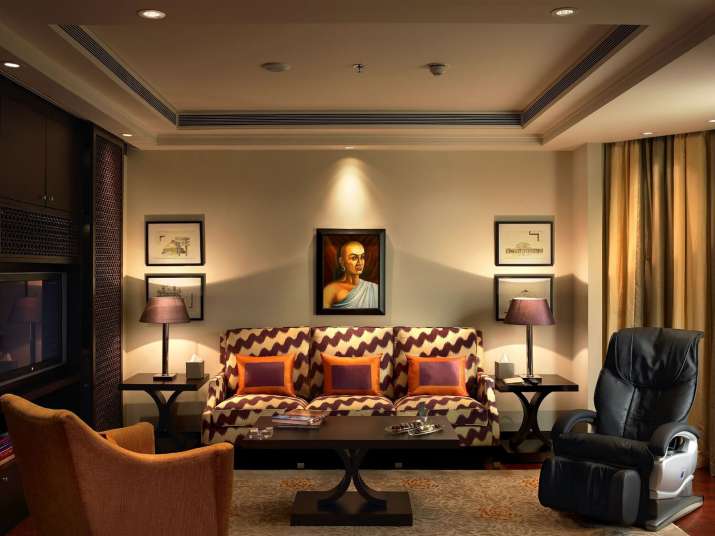 Synonymous with opulence, luxury, comfort and style, the Grand Presidential Suite is designed to play host to the extended entourage of luminaries with ease. An exclusive private entrance, a Presidential parking boulevard, a private high speed elevator, state-of-the-art security systems and a Presidential Floor Butler, everything here is complemented by discreet and efficient service. The Grand Presidential abode is a 2 bedroom mansion of luxury with silk panelled walls, dark wood flooring and magnificent artwork. This suite comprises of a Reception area, a large Living Room, a Study, a Peacock themed 12 seater Private Dining Room, an opulent Bathroom with mother of pearl accessories and imperial décor and a mini spa & gymnasium. With the latest in technology, the suite has 55’ high definition TV’s and IPOD docking station. Exclusive access to a business courtyard, The Summit Lounge and Boardroom, provide an oasis where affairs of the state can be discussed in complete privacy.

Unprecedented security arrangements have been made at ITC Maurya which also hosted former US President Barack Obama in 2015 when he came for his second state visit to India. Army and Paramilitary forces have worked overtime to turn ITC Maurya into a fortress. Security agencies are also working in close coordination with the US Secret Service. Anti-drone detachment of NSG, snipers, elite SWAT commandos, kite catchers, canine units, sharpshooters on high-rise buildings and Parakram vans have also been deployed along the routes and areas in and around the hotel where Trump will be staying, they said. Police personnel from six districts have been deployed for the security arrangements and nearly 40 companies of Central Armed Police Forces have been pressed into action.

Hundreds of high-definition CCTV cameras with night vision have been installed across the Sardar Patel Marg where hotel ITC Maurya is located to monitor the situation round-the-clock, the officials said. Five years ago, when Trump’s predecessor Barack Obama visited the national capital, the Delhi Police had rented 605 CCTV cameras and spent more than Rs one crore in hiring, installing and later removing them.

A senior police officer said, “We have also requested the anti-sabotage checking teams from paramilitary and army. They have been regularly conducting anti-sabotage checks along every route to be taken by the US President during his visit here”.

Besides the multi-layer security cover, elaborate arrangements have been made by the Delhi Police, including placement of double barricading on all the roads where Trump’s convoy is likely to pass, officials said, adding that aerial surveillance of the route will also be conducted as part of the security measures.

Jersey barriers (modular concrete or plastic barriers placed to organise traffic into lanes) will also be put up on the route, a senior police official said.

The route leading to a Delhi government school where US first lady Melania Trump is scheduled to pay a visit will also be under a high security cover, according to officials.

Trees have been trimmed according to the directions of the security agencies as part of the protocol.