Cyclone Amphan: Immediately after the landfall process began, Cyclone Amphan caused devastation in West Bengal. More than 5 thousand houses were damaged as the cyclone moved across the countryside.

Cyclone Amphan: The Cyclone made landfall near Digha in West Bengal on Wednesday afternoon. By Wednesday night, the cyclone caused widespread devastation in West Bengal and Odisha and claimed 3 lives.

It is the second super cyclone on record that has formed over the Bay of Bengal, said Mrutyunjay Mohapatra, India’s meteorological chief. The first was a devastating 1999 cyclone in Odisha state that left nearly 10,000 people dead. "Six teams have been deployed in South 24 Parganas, four teams each in East Midnapore and Kolkata, three teams in North 24 Parganas and one team each in Hooghly and Howrah," Nishit Upadhyay, NDRF 2nd Battalion Commandant said.

Cyclone Amphan is leaving a trail of destruction in its wake.

Visuals below are obtained from #Hooghly District in #WestBengal

Cyclone Amphan has claimed 2 lives in West Bengal so far. Here are some latest visuals from #Hooghly District in #WestBengal

Amphan's winds were whirling as far as 700 kilometers (435 miles) from its eye as it approached land. It is forecast to pass between the seaside resort town of Digha in India’s West Bengal state and Hatiya Island in Bangladesh with a weaker wind speed of 165 to 175 kph (102-108 mph). ​

Cyclonic storm Amphan will move North-NorthEastwards and cross West Bengal-Bangladesh coast between Digha and Hatiya close to Sunderbans during afternoon to evening of today with a wind speed of 155-165 kmph gusting to 185 kmph. Wind forecast for coastal Odisha is 100 to 110 kmph gusting to 125 kmph along and off Jagatsinghpur, Kendrapara and Bhadrak districts till afternoon and over Balasore district till evening.​

Even if it weakens, the cyclonic storm is about to bring winds of 180 kmph to 195 kmph. Kolkata, Hooghly and the adjoining areas are tipped to receive strong winds and heavy rainfall even if the monstrous cyclone loses its steam. "The effect of the cyclone is expected to be felt from 12 noon on Wednesday. The edge of the storm is expected to touch land around 2pm and the entire system should pass through by 9pm," Kolkata-based daily The Telegraph reported quoting Met officials.

Meanwhile, Bengal on Tuesday mounted one of its biggest evacuation exercises by moving more than 3 lakh people to safer places as the extremely severe cyclonic storm 'Amphan' roared towards the coastal areas of the state, officials said.

The Meteorological (MeT) Department has issued an "orange message" for West Bengal and warned of extensive damage in Kolkata, Hooghly, Howrah, South and North 24 Parganas and East Midnapore districts.

The impending cyclone has already triggered mild to medium rainfall in several parts of the state.

The MeT Department has advised all establishments and markets to remain closed in the city and adjoining areas and restrictions on movement of people on May 20.

There are high chances of disruption of rail and road link at several places, uprooting of communication and power poles, extensive damage to all types of kutcha houses and some damage to old poorly managed pucca structures and the potential threat from flying objects, the weatherman said.

There is also a likelihood of extensive damage to standing crops, plantations and orchards and blowing down of palm and coconut trees, the MeT office said. 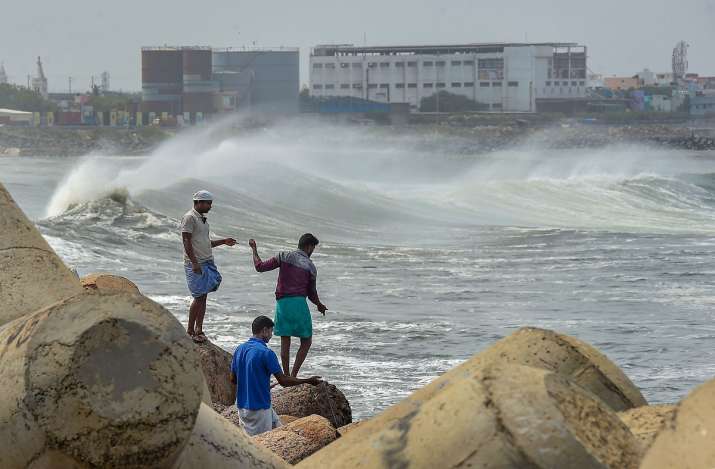