A forged note doing the rounds of social media claims that the university has terminated the services of its registrar, IPS officer Abdul Hamid, for allowing the cops on campus on December 16

A forged note doing the rounds of social media claims that the university has terminated the services of its registrar, IPS officer Abdul Hamid, for allowing the cops on campus on December 16.

The forged note states that Vice Chancellor Professor Tariq Mansoor is using his special power under the AMU Act 19 (3) to terminate Hamid with immediate effect. However, Aligarh Muslim University Students Union (AMUSU) cabinet member Ferdoous Ahmed Barbhuiya told India TV that the note had been forged and no such development has taken place.

"Some miscreants are trying to create a divide. No such thing has happened," he said.

“It is hereby notified that as per a report of the internal enquiry committee, it is established that Mr Abdul Hamid (IPS) Registrar was found guilty for allowing police in the university campus,” says the forged order, dated Dec 23. 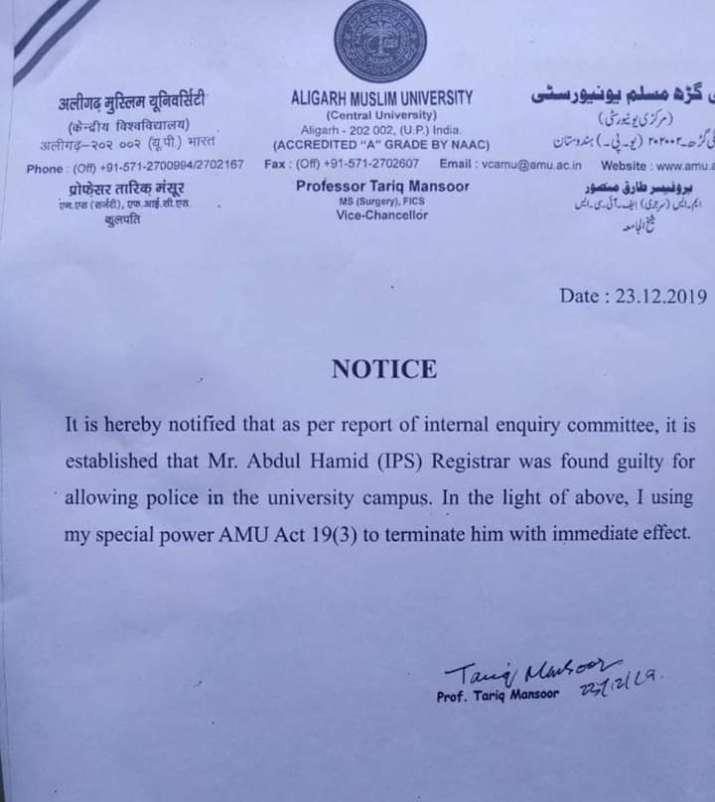 Justice VK Gupta, the retired chief justice of the Chhattisgarh High Court, is conducting a one-man internal probe to investigate violence on the campus on Dec 16. Hamid, an IPS officer, was appointed as the university’s registrar in August last year for a tenure of two years.

Clashes in AMU had erupted following police action against demonstrators in the vicinity of Jamia Millia Islamia in New Delhi on December 15, when some of the agitators, on being chased by police, had sneaked into the varsity campus, prompting the security personnel to enter the premises.

AMU was later closed till January 5, and the one-man inquiry committee set up on December 21.

Narrating the sequence of events which led to the University's decision to call in the police on December 15 night, the Vice Chancellor had said, "When we received information that some outside elements had infiltrated the protesting students and the situation threatened to go out of hand, we took this difficult decision to protect innocent lives and the university's property.”

He added that "in the past, there have been several instances when delay in intervention of police had led to grave violence in which innocent students had paid with their lives and University property was vandalized and set on fire.”