Heavy rain has caused travel disruption, power cuts and flooding in many low-line areas of Mumbai and majority of adjoining districts. The IMD has predicted more rains in the next 24 hours. Tuesday saw 26 people lose their lives in Mumbai and Pune in different rain-related accidents. Several stations in Mumbai (Kurla, Sion, Borivali) submerged while roads looked more convenient for swimming than walking. Mumbai Rains Live Updates:

In its weather forecast released at 2 am on Saturday, the IMD has said that Mumbai City and suburbs will receive heavy to very heavy showers on Saturday.

5:52 pm- Mumbai: A portion of a building collapsed near Kurla Station (West), today. No injuries/casualties reported.

Mumbai: A portion of a building collapsed near Kurla Station (West), today. No injuries/casualties reported. pic.twitter.com/6l7Uwo6uCT

5:45 pm-  A wall of a house has collapsed at Jagruti Nager, Ghatkopar (West) in Mumbai, according to news agency ANI. No injuries or casualties have been reported. More details are awaited.

Mumbai: A wall of a house has collapsed at Jagruti Nager, Ghatkopar (West). No injuries/casualties reported. More details awaited.

Kurla is a low-lying area of Mumbai and water accumulates there almost every rainy season. Reports suggest that Bandra-Kurla Complex, a business hub, has got a respite from rains.

#MumbaiRains: #Rain in #BKC has stopped for now, but the area looks amazing https://t.co/IlLTXsMbwk

1:56 pm: This is how Mumbaikars travelled this morning

Railway tracks near Kanjur Marg station on Central line were completely submerged this morning. Trains had to wade through the waters very carefully. Watch the video below.

Brihan Mumbai Municipal Corporation (BMC) has made preventive treatment for leptospirosis free-of-cost for citizens. The facility can be availed at BMC-run dispensaries and ward offices.

We are concerned about your health. Preventive treatment for Leptospirosis is made available free for the citizens ,at MCGM dispensaries and also ward office for those who have waded through accumulated water specially with cuts/ abrations in legs.@mybmc @mybmcSWM pic.twitter.com/ViQA1p0GOU

1:35 pm- Two deaths due to electrocution reported in Thane

Two deaths were reported in two separate incidents of electrocution in Thane. First took place in Thane city while the other took place in Ambarnath in Thane District.

11:30 am: Tree falls down in Sion Koliwada, crushing cars parked under it

Mumbai: Two cars damaged in Sion Koliwada Punjabi Camp after a tree fell down on them, following heavy rainfall in the area today. #Maharashtra pic.twitter.com/ywCRquvuG6

10:10 am : Image from outside Andheri Railway station 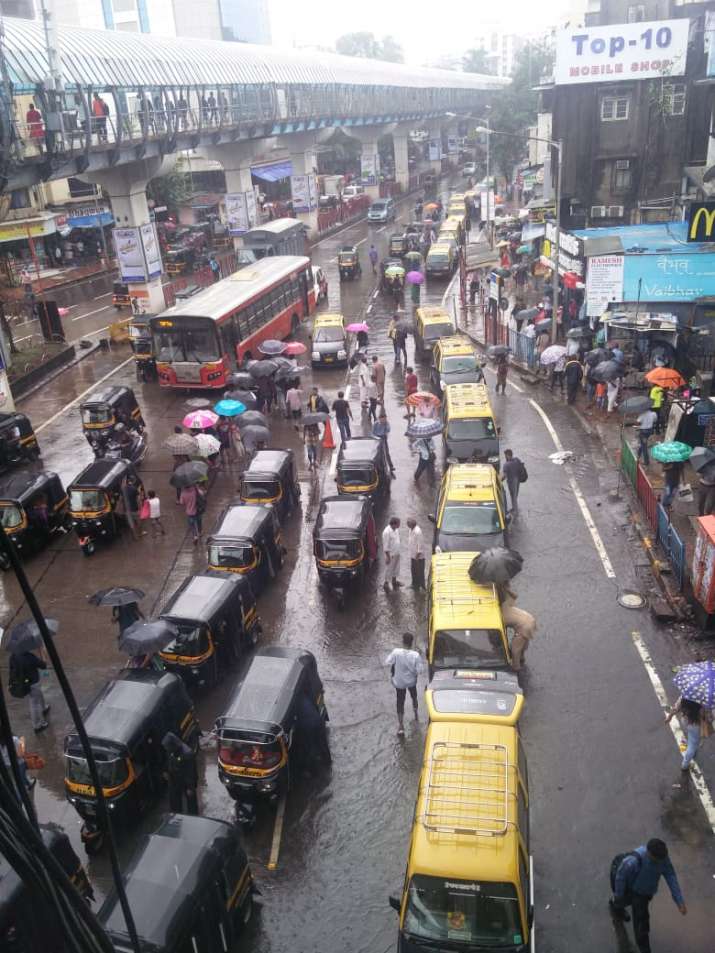 9:55 am: Heavy rains have set-in in Mumbai and Thane on a second consecutive day. Rains have started affecting local train services. Trains are running 15-20 minutes late.

9:29 am: Man dies as tree falls on his auto in early hours of Saturday in Ambarnath near Mumbai​. 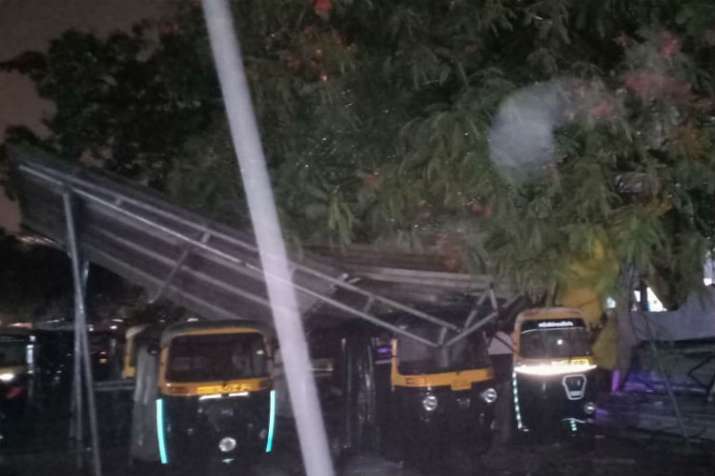 9:13 am: Rains continue to lash Mumbai

8:33 am -  IMD has said that "very active Monsoon conditions are prevalent over west coast.

8:23 am - Western and Central Railway have said that local trains are running normally.

7:00 am - Wall collapse in Chembur in Mumbai. Incident took place in early hours of Saturday. The debris flattened auto-rickshaws parked nearby. No casualties have been reported.

Mumbai: A wall in Chembur collapsed on auto-rickshaws around 2 am today. Fire brigade personnel removing the debris. No casualties reported. #Maharashtra pic.twitter.com/zCEMvUGjB9

A wall collapsed on auto-rickshaws in Chembur in wee hours of Saturday. The collapse flattened the vehicles completely. The incident took place in Chembur in eastern suburbs of Mumbai. Fire Brigade personnel rushed to the spot to remove the debris and rescue people if needed. No casualties have been reported so far.

Life in Mumbai and surrounding areas was thrown out of gear after heavy rains overwhelmed the city. Suburbs received more than 100 mm of rain in just 12 hours. This was 30 per cent of average June rainfall in suburban Mumbai.