The newly-elected MLA from Vadgam in Gujarat termed the refusal to grant permission to the ‘Yuva Hunkar’ rally in Parliament Street an example of the “Gujarat model” of politics.

The Narendra Modi government poses a “threat” to the country’s democracy and Constitution, Dalit leader Jignesh Mevani said today at a youth rally for which the Delhi Police had refused permission.

The newly-elected MLA from Vadgam in Gujarat termed the refusal to grant permission to the ‘Yuva Hunkar’ rally in Parliament Street an example of the “Gujarat model” of politics.

'Go to Himalayas, we are bored of you': Jignesh Mevani to PM Modi

“The 125 crore people of this country are watching that someone is not being allowed to speak for merely demanding the release of Chandrashekhar Azad, effective implementation of the Constitution and two crore jobs to the youth. If an elected representative does not have the right to do so, then this is Gujarat model,” Mevani said to loud cheers from a crowd comprising student activists from Delhi, Lucknow and Allahabad among other places.

The rally—held in Parliament Street in the heart of the national capital where prohibitory orders are in force through the year—was demanding the release of Dalit outfit Bhim Army founder Chandrashekhar Azad.


The gathering also sought to emphasise issues like educational rights, employment, livelihood and gender justice.
Mevani said he will stand guard against the politics of hatred and stick to constitutional values and the “politics of love”, along the lines of statements made by Congress President Rahul Gandhi after the Gujarat polls.

Although authorities had maintained till the last minute that Mevani and his supporters did not have permission to hold the event, it seems the rally organisers and Delhi Police reached a compromise later.

The rally, which began around 1 pm, saw a modest turnout.

Former and current JNU student leaders, including Kanhaiya Kumar, Shehla Rashid and Umar Khalid were present on the stage, metres away from the Parliament Street Police Station. 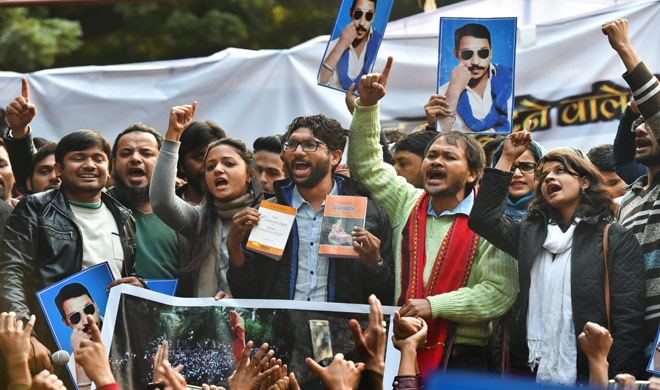 Azad (30) was arrested in June last year from Himachal Pradesh as he is the main accused in Thakur-Dalit clashes in Uttar Pradesh’s Saharanpur district. His supporters turned up with posters bearing his image.