Bigg Boss 14: Karan Patel is NOT a part of Salman Khan's show

Bigg Boss 14: It was being said that TV actor Karan Patel who is well known for playing the crucial roles in shows like Yeh Hai Mohabbatein, Kasautii Zindagii Kay 2, etc has said yes to Salman Khan's show. Not just him, buzz added that his co-star Aly Goni will also be a part of the reality show this year. But what's the reality? Find out!

As soon as the Bigg Boss 14 makers announced the premiere date as October 3 through a new promo, fans got super excited about the same and wanted to know about the contestants this year. Even though no official name has been shared, a tentative list has been doing rounds on the internet that includes names of celebrities from different walks of life. One amongst those was of TV actor Karan Patel who is well known for playing the crucial roles in shows like Yeh Hai Mohabbatein, Kasautii Zindagii Kay 2, etc. It was being said that now that his show was going off-AIR he has decided to get locked inside Salman Khan's Bigg Boss house. Not just him, buzz added that his co-star Aly Goni will also be a part of the reality show this year. But what's the reality? Find out!

For those who got excited knowing about his participation, there's a sad piece of news. The actor's PR team while addressing the news clarified and said that he is not going to Bigg Boss this year. Moreover, they have also called the rumours absolutely fake and baseless. Not only this, but the actor also gave a statement to India Forums and said, "It’s not true."

Have a look at the clarification here: 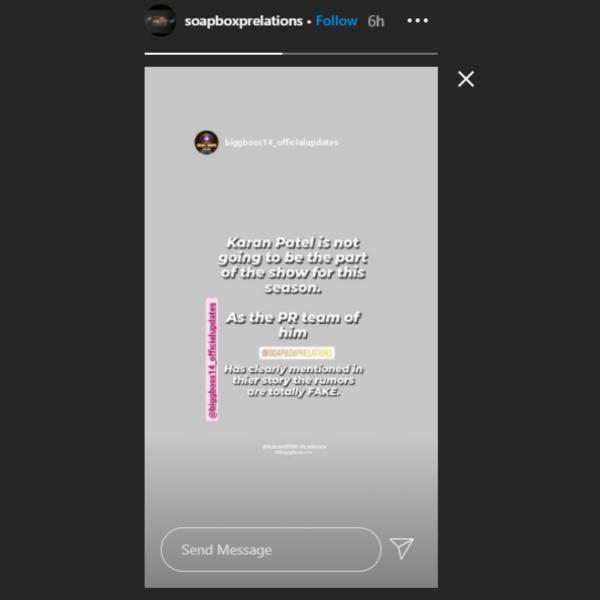 Not just this Aly Goni has clarified that he is not a part of the upcoming season of Bigg Boss, because he is tied up with a web series. "I am not doing 'Bigg Boss'. The format and concept of 'Bigg Boss' are fantastic, and this season will rock too. I may do it in future, as they say 'never say never'," said the 'Yeh Hai Mohabbatein' actor.

Aly will be occupied with the web series "Zidd", an action-packed war series starring Amit Sadh that he describes as a "big" opportunity. "It also stars Amit Sadh whom I am very fond of. His work on the web platform has been very well received by all," said Aly.

ALSO READ: Bigg Boss 14: YouTuber CarryMinati to be a part of Salman Khan's reality show? Here's what he said

The fire behind the rumour fueled up when Karan commented on a picture of Aly wrote, "Kahan chale sab (Where are you all headed)?" To this he replied, "@karan9198 bas agle maheene se sirf aapke pass honga (from next month, I will only be with you)."