Filmmaker Imtiaz Ali turned a year older on Wednesday. Many celebrities including Anushka Sharma and Kartik Aaryan poured in their best wishes for Imtiaz as he marked his 50th birthday.

Filmmaker Imtiaz Ali turned a year older on Wednesday. Many celebrities including Anushka Sharma and Kartik Aaryan poured in their best wishes for Imtiaz as he marked his 50th birthday. Actress Anushka Sharma penned a heartfelt note for him and shared a cute throwback picture with her Jab Harry Met Sejal director. Along with the candid click, the actress wrote, "Happy Birthday! May you always find the best stories to tell, the best tea to drink and the best places to explore." 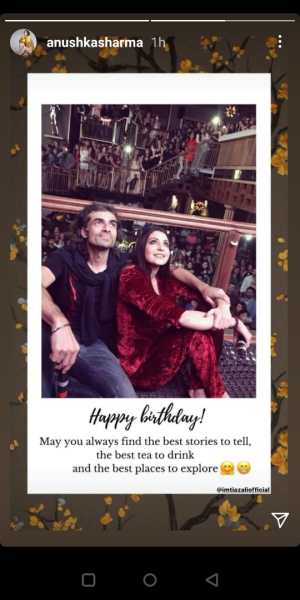 Anushka's collaboration with Imitiaz in 2017's Jab Harry Met Sejal also starred Shah Rukh Khan. In the picture, Imtiaz and Anushka are seen sitting together and staring at something above them.

Bollywood actor Kartik Aaryan has shared an emotional video showing a glimpse of the special bond he has with Imtiaz. Kartik has played the lead role in Imtiaz's 2020 film Love Aaj Kal, which also starred Sara Ali Khan in the lead role. The clip that Kartik has shared today, gives a peek of all the fun Kartik has had with Imtiaz while shooting their film. Kartik’s voiceover from an old interview can be heard, where he says, “Getting an opportunity to work with Imtiaz Ali sir has been life-changing for me as a person and an actor. I feel enriched and fulfilled.” He captioned the video, “Happy birthday to my favourite soul.”

Randeep Hooda tweeted, “The places he takes you within and without !! Happy Birthday!” He had worked with Imtiaz Ali in Highway along with Alia Bhatt, as well as Love Aaj Kal 2.