Presenting the Budget 2019-20, Finance Minister Piyush Goyal laid out vision for 10 most important dimensions in 2030.

Unveiling the development vision for the next decade, the government on Friday said it would focus on 10 key areas including job creation, physical and social infrastructure building, pollution-free nation and clean rivers.

Presenting the Budget 2019-20, Finance Minister Piyush Goyal laid out vision for 10 most important dimensions in 2030.

Interim Budget 2019: Over Rs 240 crore budget for training of babus abroad and in India

"The first dimension of this vision will be to build physical as well as social infrastructure for a USD 10-trillion economy and to provide ease of living," he said.

On the social infrastructure side, Goyal said every family will have a roof over its head and will live in a healthy, clean and wholesome environment.

"We will also build a quality, science-oriented educational system with institutes of excellence providing leadership at the top," he said.

The other dimensions of the visions include creating a Digital India reaching every sector of the economy; making India a pollution-free nation; expanding rural industrialisation using modern digital technologies to generate massive employment; space; and clean rivers. 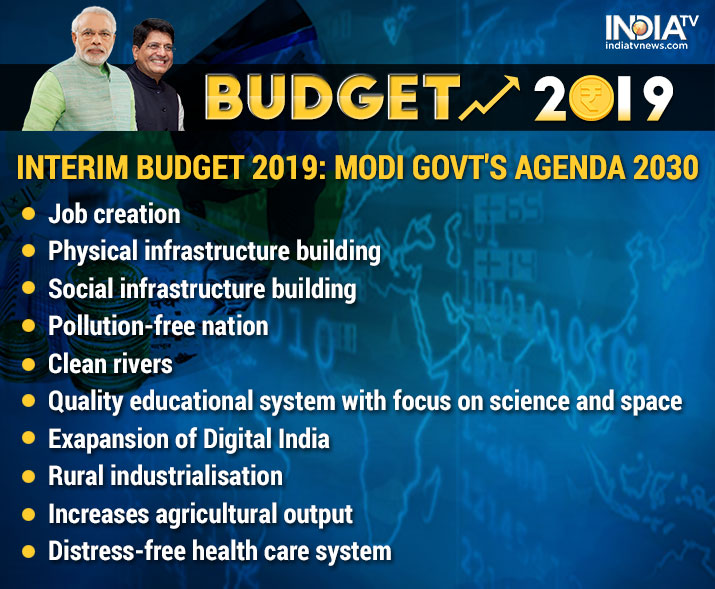 Elaborating on rural industrialisation, he said this would be built upon the Make in India approach to develop grassroot-level clusters, structures and mechanisms encompassing the MSMEs, village industries and start-ups spread in the country.

The fifth dimension of the Vision for India 2030 is clean rivers, with safe drinking water to all Indians and efficient use of water in irrigation using micro-irrigation techniques.

"Our coastline and our ocean waters powering India's development and growth is the sixth dimension of our vision," he said, adding that making India self-sufficient in food, exporting to the world to meet their food needs and producing food in the most organic way is the eighth dimension.

"High farm production and productivity will be achieved through modern agricultural practices and value addition. An integrated approach towards agro and food processing, preservation, packaging and maintenance of the cold chain will be our focus of attention," he added.

Further, he said that by 2030, the government will work towards a distress-free health care and a functional and comprehensive wellness system for all.

"Our India of 2030 will have a proactive and responsible bureaucracy which will be viewed as friendly to people," the minister said.

With this comprehensive 10-dimensional Vision, "we will create an India where poverty, malnutrition, littering and illiteracy would be a matter of the past. India would be a modern, technology driven, high growth, equitable and transparent society," the minister said.