With the new iOS 15, Apple has added new set of features, improvements and more to the iPhones.

Every year, Apple comes with an update to iOS, the operating system that powers the iPhone. After releasing it to developers, the tech giant has rolled out the latest iOS 15 for public beta testers, which basically means that the new version of the operating system is still being tested and tweaked before it will be released to the general public.

The iOS 15 beta version allows tech enthusiasts to try out the features that will be rolled out as part of the next-gen iOS and for Apple to fine-tune its offering based on user feedback.

With the new iteration of iOS, the company has added a new set of features, improvements and more. Here’s everything you need to know about the all-new iOS 15 update.

iOS 15: Safari gets a new design

The in-built browser of the iPhone — Safari — is getting a new design in iOS 15. As part of the makeover, the company has removed the tab bar from top, and now it is placed at the bottom of the screen to allow users one-handed browsing.

FaceTime is one of the best ways to communicate with your friends and family members if they are on Apple devices. The app offers a seamless video call experience. Now, the company will be allowing users to add people who are on Windows or Android devices. While those folks will still not be able to make calls, they will at least be able to be a part of a FaceTime group call, which can be joined using a join link.

That's not it. FaceTime will also let multiple users share a video and watch it together or just create and listen to a playlist. With this, the company is eliminating the need of installing third party video conferencing apps like Zoom. The new FaceTime features will not only work on iOS 15 but will also be available on the new versions of iPadOS and macOS. 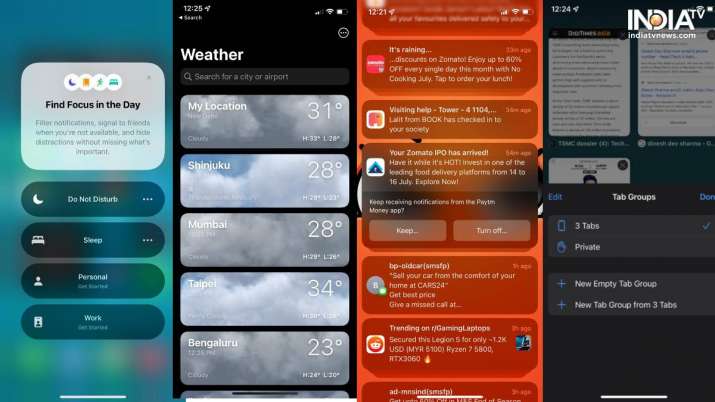 With the iOS 15 update, Apple has added a new feature called notification summary, which will basically provide a gist of what is happening in your apps. This will help reduce distractions and the amount of time you spend in the notification shade.

Apple has added a new Live Text feature that will now allow users to recognise text, phone numbers, links, etc. It will work on screenshots, quick look and even in the camera app. Initially, it will be able to understand seven languages and it will work on iPhone, iPad and Mac.

Spotlight search has also received some improvements as it will now support Photos. Basically, users will be able to look for a photo using Spotlight universal search feature.