The Elyments app is an attempt to make social media apps a one-stop place, which is Indian too. Read on to know more about the new Indian app

The major step taken by India to ban over 50 Chinese apps has led to several Indian apps coming to surface and gaining the popularity they needed. With an aim to promote indigenous products and become self-reliant, a new Indian 'super' app -- Elyments -- has arrived that is touted as the one-stop social media app and competes with the likes of Facebook and WhatsApp. Read on to know more about the app.

Elyments app: What is it?

The Elyments app has been recently launched by the Vice President of India, M Venkaiah Naidu in India. It is an umbrella app that allows you to perform tasks such as take photos and videos, talk to others, upload posts, look for interesting posts, make audio and video calls, and more. All this comes in a privacy-focused package. It claims to keep the users' data safe and secure with end-to-end encryption and the presence of data servers in the country itself.

The app is available in more than eight Indian languages and currently has over 1 million downloads on the Google Play Store, which is quite a lot considering the app launched just two days ago.

The Elyments app is available to download via both the Google Play Store and the App Store. Here's how you can get it:

Elyments app: How to use on Android, iOS?

The Elyments app is a simple one with a clean UI. It is segregated into five sections: Hub (where topics such as news, gaming, health & lifestyle and more are found), Social (where you can connect with people and discover them), Chat (where you can chat and conduct audio/video calls), Alerts (for app notifications), and Settings (for al the app settings). 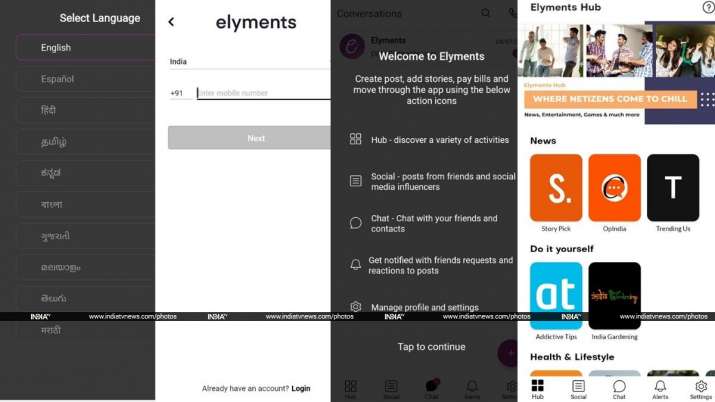 You need to follow these simple steps to start using the app:

The Elyments app is an attempt to make social media apps a one-stop place, which is Indian too. With an organised, neat UI, and privacy features, the app allows you to access various features that are quite popular these days and accessible via apps such as Facebook, WhatsApp, and more. The app has gained a million users already and with more updates and features in the future, it can easily give tough competition to others in the arena.